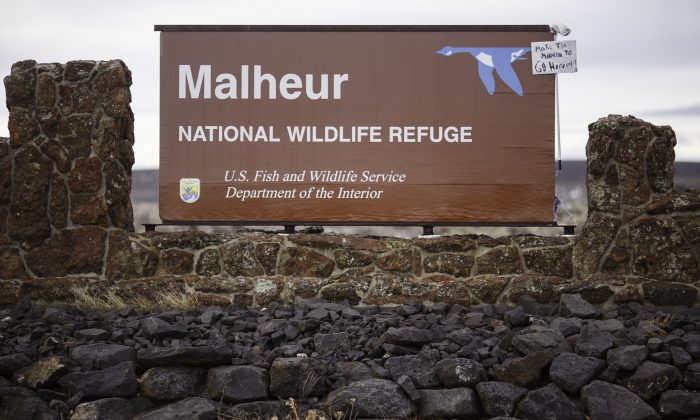 A mop and sign are taped to a sign for the occupied Malheur National Wildlife Refuge near Burns, Ore., on Jan. 29, 2016. (Rob Kerr/AFP/Getty Images)
US

BURNS, Ore.—Four people occupying an Oregon wildlife refuge held their position Saturday and posted live videos that reveal their hyper-vigilance against federal officials who they fear may try to move them out to end the month-long standoff.

The jailed group’s leader, Ammon Bundy, and 10 others who were arrested earlier in the week remained in custody.

During one early morning video posted by a man identified as David Fry, the armed occupiers express concerns about nearby aircraft, and Fry gets jumpy when he believes he hears gunshots near the entrance.

“False alarm,” he then said after realizing the noise came from a generator or some other type of equipment.

“We’re not dead yet,” he said, repeating a theme that he and others have expressed through the weeks of the occupation. They’ve said they will only leave if given immunity from prosecution and are ready to die defending their position.

The FBI has said it’s trying to resolve the situation peacefully.

Prosecutors Use Oregon Refuge Occupiers’ Own Words Against Them

Meanwhile, some residents of the nearby town of Burns, Oregon, say they are sick of the disruption to their lives.

“We just want to go back to the way we were,” said Barbara Ormond, who owns a quilt store in downtown Burns, on Saturday. “We want everyone to leave us alone.”

While the standoff has led to filled-up hotels and restaurants, others say the conflict is upsetting to residents and pitting neighbor against neighbor as people have opposing views.

“It’s tearing the community apart,” said Bonnie Angleton, who owns a gift shop downtown. “I care about the people who live here.”

Kate Marsh, an artist in town, said many residents work for the government, while many others have their livelihoods depend on government agencies.

“There is some dissension in the community,” Marsh said. “Friends are fighting over the issue.”

Court documents against the 11 occupiers under arrest show FBI agents have scrutinized social media postings, interviews and online talk shows that have been during the standoff that began Jan. 2.

Authorities say Bundy, the principal leader of the group that seized the Malheur National Wildlife Refuge, and others used the social media and other platforms to summon recruits to join their takeover.

Bundy and several other jailed leaders appeared Friday in federal court in Portland, where a judge denied their release. U.S. Magistrate Judge Stacie Beckerman said Bundy, his brother Ryan Bundy and Ryan Payne pose a danger to the community, and she is concerned they would not follow orders to return to Oregon for criminal proceedings.

The only woman arrested so far in the standoff, Shawna Cox, will be allowed to go home while her case makes its way through the court system. But Beckerman said that won’t happen until after the armed occupation ends.

Ammon Bundy’s lawyer, Lissa Casey, said her client is not aligned with those remaining at the refuge near Burns and he wants to go back to his family.

“He is done in Harney County,” she said.

Bundy and his followers took over the refuge to demand that the federal government turn public lands over to local control. They have complained about what they say are onerous federal rules governing grazing and mining rights across the West.

Court documents detail some of the evidence against the occupiers. The charges against the defendants say the refuge’s 16 employees have been prevented from reporting to work because of threats of violence.

A criminal complaint filed earlier this week makes reference to an online video that showed Bundy saying the group planned to stay for several years. He called on people to “come out here and stand,” adding: “We need you to bring your arms.”

A video posted Jan. 4 showed another defendant, Jon Ritzheimer, saying he was “100 percent willing to lay my life down.”

In a video posted a day later, Ritzheimer talked about Robert “LaVoy” Finicum and other occupiers taking up a “defensive posture” at the refuge.

Finicum was killed Tuesday night in a confrontation with the FBI and Oregon State Police on a remote road. Bundy and four others were arrested during the encounter.

At one point, a couple of dozen ranchers and other protesters were holed up at the refuge, but they began clearing out after the arrests and killing.

The FBI on Thursday released a video showing Finicum’s death, to counter claims he did nothing to provoke his killing.

In the aerial video, Finicum is pulled over in his truck but then takes off in the vehicle and plows into a snowbank because of a roadblock. He gets out and has his hands up at first, then appears to reach toward his jacket pocket at least twice. He is shot and falls to the snow.

The FBI said a loaded handgun was found in the pocket.

In a statement, Finicum’s family said “based on the information currently available to us, we do not believe LaVoy’s shooting death was justified.”

Ammon Bundy is the son of Nevada rancher Cliven Bundy, who was involved in a tense 2014 standoff with the government over grazing rights.