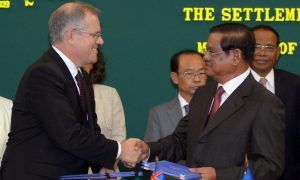 PHNOM PENH, Cambodia—Four asylum seekers rejected by Australia started a new life in Cambodia on Thursday, becoming the first to be resettled under a deal between the two nations that human rights advocates criticized as misguided and inhumane.

Cambodia agreed to accept two Iranian men, an Iranian woman and a Rohingya man from Myanmar under a 40 million Australian dollar ($32 million) four-year agreement to resettle hundreds of asylum seekers who have been living in an Australian-run detention camp on the Pacific island nation of Nauru for years.

However, the choice of impoverished Cambodia as a new home for asylum seekers has so far attracted little interest among the refugees, and only four among 677 on Nauru had signed up for the package.

Cambodia is plagued by poverty, corruption and human rights abuses. Medical care outside main cities is almost nonexistent and jobs are so scarce that more than 800,000 people have left to find work abroad.

“Cambodia clearly has no will or capacity to integrate refugees permanently into Cambodia society,” said Phil Robertson, the deputy Asia director at Human Rights Watch.

“These four refugees are essentially human guinea pigs in an Australian experiment,” said Robertson, adding that the Cambodian government had sent dozens of minority Montagnard refugees back to Vietnam and Uighur asylum seekers to China.

Australian officials have said they were working with the International Organization for Migration and other groups in Cambodia to provide the four with housing, jobs, transport and education.

After arrival, they were taken to temporary accommodation in the capital, IOM said in a statement. The agency said it would begin providing essential support, including language training, cultural orientation, and health and job services.

Australia’s tough policies of turning back and refusing to resettle any refugee who arrives on its shores by boat have stopped them from coming since the conservative government was elected in September 2013, according to Immigration Minister Peter Dutton.

UN Credibility on Trial in Cambodia

But the government still has to resettle more than 31,000 of the 52,000 asylum seekers who arrived in Australia by boat during the six years that the Labor Party was in power.

As part of its efforts to deter boats of asylum seekers, Australia made the agreement with Cambodia last September. Cambodia had sent officials to Nauru to meet the four and to make sure their moves were voluntary.