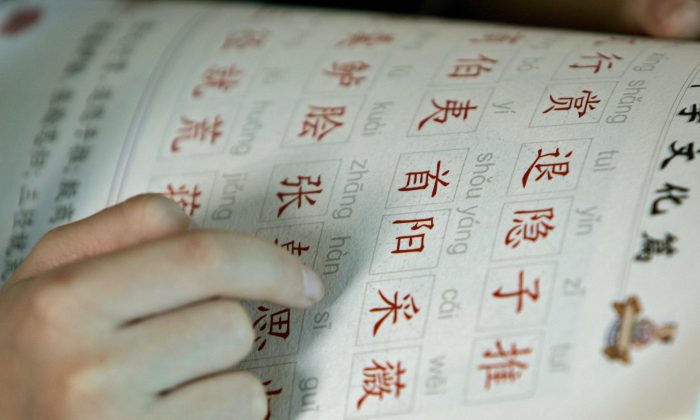 A student reads a textbook during a class in Wuhan, central China, on April 21, 2007. (LIU JIN/AFP/Getty Images)
China

4 Reasons Why Chinese Is Easier Than You Think

When people hear about the Chinese language, they are usually put off by the writing system, which supposedly requires knowledge of tens of thousands of unique characters.

But in fact, Chinese writing isn’t as scary as it seems, and the Chinese language doesn’t pose the Everest-sized challenge typically ascribed to it.

1. You Don’t Actually Use That Many Characters

One of the first complaints that critics of the Chinese language make is that there are too many characters. How terrible to have to memorize thousands of completely different symbols when English only needs 26 letters!

This obstacle is overstated. Strictly speaking, Chinese includes over 50,000 characters, but the vast majority of these are variants of more commonly used glyphs. Others have simply fallen out of use. Even among the 5,000 or so that are actually used, only about half can be considered common.

There are a couple dozen different strokes and 200 radicals, which play a similar role to suffixes and prefixes in English. Some radicals double as full characters. The student who masters the strokes and radicals will see not 5,000 oppressive symbols but a family of related if still unintelligible words.

Luckily for the foreign learner, the Chinese lexicon is surprisingly logical and in most cases consistently ordered. Just as strokes and radicals build characters, characters representing basic or simpler meanings are used in succession to form more elaborate, technical, or abstract concepts.

An example of this is the word meaning refrigerator. In Chinese, it is written ” 冰箱” and combines the characters for ice and box.

Other combinations reflect a unique Chinese poetry. While “identical twin” is rendered with the clinical-sounding “double womb-embryo,” the term for “twin brother and sister” is “dragon-phoenix-embryo.”

On a practical level, the large number of individual Chinese characters can be mixed to create a huge number of subtle variations impossible for other languages to describe with the same brevity. The number of strokes in one character may be complex, but its pronunciation will never exceed one syllable.

The word “導,” meaning roughly “guide,” can be combined with other characters to form meanings like “to cause” (導致), “to lead around” (引導), “to instruct or educate” (教導), “to direct [to some destination or goal]” (指導), and the list goes on.

Simplified Beyond Sense: The Travesty of Modern Chinese Writing

How About a Nice Game of Go?

3. There Aren’t Many Hard Grammatical Rules

While European languages tend to break information up into clear words, the lines are less definite in Chinese, which almost never has spaces. Similarly, the distinction between different types of words—nouns, verbs, adjectives—are often ambiguous as many terms can be used in different roles without any modification.

The four-character complete phrase, known in Chinese as “chengyu,” thrives on this principle. Idioms, flowery adjectival terms, rhymes, and even fables and historical events can be summed up with the four-syllable chengyu.

Linguists classify Chinese as a highly analytical language, because it does not convey changes in tense, gender, or case by changing the forms of words. Instead, such details are clarified through the addition of characters to qualify the statement. This sets Chinese apart from the highly complex grammars of languages like German or Russian, which may have many dozens of forms for a single verb or adjective.

For the native English speaker, Chinese syntax is familiar as it follows the familiar subject-verb-object word order.

4. Reading and Writing Are Efficient

English uses more or less phonetic combinations of letters to create words, but we don’t actually read every letter. Once fluent, we see each word as a brick in its sentence—essentially doing what the Chinese do when they see characters.

The difference is that Chinese, with thousands of characters but just several hundred unique sounds, is first and foremost a visual language, especially suited for reading and writing. Over thousands of years and millions of square miles of use, the spoken forms of Chinese and other Asian languages that use the same writing may have changed drastically, but the characters have remained much the same.

Because Chinese text places so much emphasis on meaning rather than sound, knowing the characters fluently allows one to read without having to “think” out the sounds and directly absorb the information.

The same principle holds for writing. A character can often share identical pronunciation with totally different characters, meaning that spoken Chinese requires more explanatory words to ensure comprehension. This would be superfluous in writing, which can afford extreme brevity since the words are available for the eyes to see.