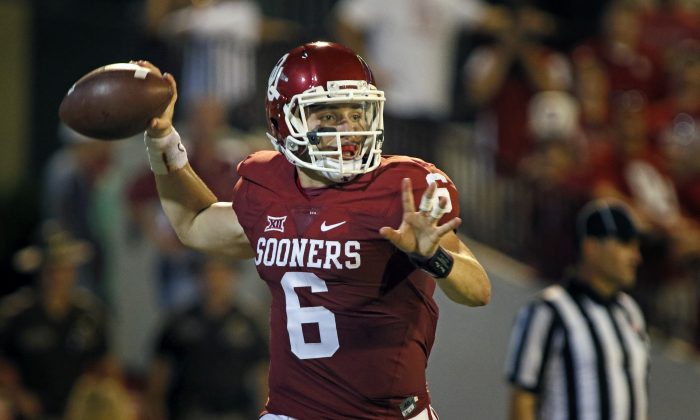 Quarterback Baker Mayfield has the Oklahoma Sooners in the playoffs and in the running for the first national title since 2000. (Brett Deering/Getty Images)
College Sports

The College Football Playoffs don’t start until the end of December, but it’s never too early to predict the outcomes so here they are: Oklahoma is going to top Clemson, while Alabama takes care of Michigan State. Here’s why:

1. Clemson carries the burden as the top seed (and lone unbeaten)

The Tigers may be the best team in the playoffs, but they’ll be playing with the extra burden of having the top-seed target on their backs. It’s not an easy burden to bear. Especially when you’re the lone unbeaten as well.

Last year the top seed was Alabama, and they looked like they were playing with the weight of the world on their shoulders. Nick Saban’s Crimson Tide lost to fourth-seeded Ohio State 42–35 in a game where Saban’s vaunted defense went AWOL. Clemson is a great team, but it seems that being the top seed is just another obstacle in the course to a national title.

Mayfield—the former walk-on who earned the starting position as a true freshman for Texas Tech two years ago—is one of the most underrated players in the game. He doesn’t have the most talent, but he never gives up on a play or a game and he constantly surprises people by turning a nothing play into something.

His heroics at the end of the Tennessee game—where he helped rally OU from a 17–3 4th-quarter deficit to win in overtime—was one of the more gutsy performances of the season. Watching him play with the Sooners’ backs against the wall versus Clemson should be entertaining.

1. The odds are against Michigan State having this many escapes

The Spartans played four teams that were ranked in the top 12 of the AP polls this season and won all four by a total of 13 points—that’s an average of 3.3 per game. Included in that were the blocked punt return for the game-winning TD (with no time left) to beat Michigan, the never-ending drive against Iowa that culminated in the winning TD with 27 seconds left to beat Iowa, and the game-winning FG against Ohio State as time ran out. Even the win over Oregon required a late defensive stand.

Understand, I wouldn’t expect them, or anyone, to blow out the likes of Oregon, Michigan, Ohio State, and Iowa, but all four games could have very easily been losses. They’re either a team of destiny or are overdue for their second loss. Here’s guessing it’s the latter.

Why Derrick Henry Should (Narrowly) Win the Heisman

As hard as this is to believe, the Tide were written off by some earlier in the season after a 43–37 home loss to Ole Miss in the third game of the season. This was on the heels of their playoff-opening loss to Ohio State the season before and the 45–31 loss that Oklahoma gave them in the Sugar Bowl following the 2013 season.

For a program that had won three of the last four national championships, finishing outside of the title discussion two straight seasons was something new. But Saban righted the ship. The Tide have won eight straight games—seven of them by double digits—and are focused on redeeming the program.