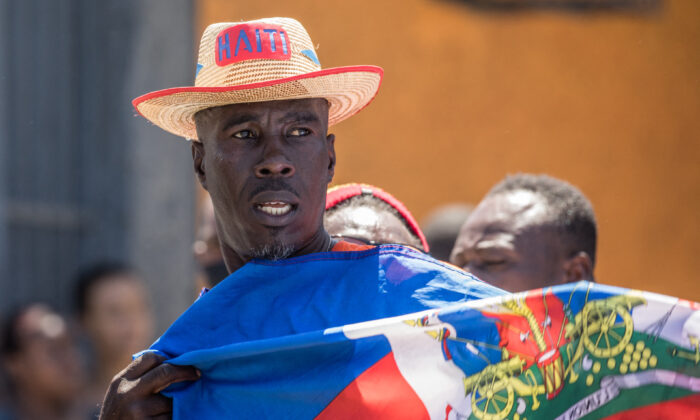 Haitians demonstrate during a protest to denounce the draft constitutional referendum carried by the President Jovenel Moise in Port-au-Prince on March 28, 2021. (Valerie Baeriswyl/AFP via Getty Images)
Americas

Four “presumed assassins” of Haiti’s president Jovenel Moïse were shot by police and two others were captured, the country’s police chief said on Wednesday.

Haiti’s police chief, Léon Charles, said in a statement that three police officers were held hostage and subsequently freed in the operation.

“Four mercenaries were killed, two were intercepted under our control. Three policemen who had been taken hostage have been recovered,” Charles said.

Interim Prime Minister Claude Joseph confirmed the killing of the four suspected killers of 53-year-old Moïse, who was killed early Wednesday during an overnight raid of his home.

The president’s wife, Martine, was also wounded in the attack, and was reported to be in critical condition. She was taken to Miami for treatment, government officials said.

Joseph earlier said the president was assassinated in a “highly coordinated attack” by a “highly trained and heavily armed” group.

The killing of Haiti’s president comes amid growing chaos in a country already enduring gang violence and political instability.

Bocchit Edmond, the Haitian ambassador to the United States, said the attack was carried out by what he described as by “well trained professional commandos” and “foreign mercenaries.”

“They needed Haitian automobiles to get to the president’s house,” he said.

Edmond declined to comment on possible suspects or a possible motive but said they were masquerading as agents of the U.S. Drug Enforcement Administration. The DEA has an office in the Haitian capital to assist the government in counternarcotics programs, according to the U.S. Embassy.

Edmond said that Haiti has asked the U.S. government for assistance in their investigation of the assassination, which is being led by the Haitian national police.

Meanwhile, Joseph, in an interview with The Associated Press, called for an international investigation into the assassination, adding that elections scheduled for later this year should be held. He pledged to work with Moïse’s allies and opponents alike.

“We need every single one to move the country forward,” Joseph said. He alluded to enemies of the president and described Moïse as“a man of courage” who had opposed “some oligarchs in the country, and we believe those things are not without consequences.”

President Joe Biden said in a statement that he was “shocked and saddened to hear of the horrific assassination,” and condemned the “heinous act.”

“The United States offers condolences to the people of Haiti, and we stand ready to assist as we continue to work for a safe and secure Haiti,” Biden said.

Unrest in Haiti has intensified in recent months. Moïse, who was elected by a narrow margin in 2016, only took office in 2017 due to unrest. Opponents argued that his term legally ended in February this year but he refused to leave office, arguing that his term should end later because he was delayed in assuming office.

The main opposition parties said they were greatly dismayed about the killing.

“In this painful circumstance, the political forces of the opposition condemn with utmost rigor this heinous crime that is at odds with democratic principles,” their statement said.

The parties added that they hope the National Police will take all necessary measures to protect lives and property, and called on Haitians to be “extremely vigilant.”

Before his death, Moïse was pushing for a referendum to reform Haiti’s constitution, with proposals that included restructuring the government.

He said the revisions were to streamline the country’s divided government by removing the position of prime minister, and replacing it with a vice president who answers to the president. It would also eliminate the Senate, replacing it with a single legislative body elected every five years.

Although Moïse’s approach had received backlash, many Haitians say a new constitution is needed.

“We need a system that works,” Moïse had told the New York Times in a telephone interview in March. “The system now doesn’t work. The president cannot work to deliver.”

“The 1987 Constitution enshrined many gains, but has had its day,” he said in a Twitter post in March. “We must have the courage to adopt another which, through futuristic arrangements, will lead Haiti to a more balanced political regime less likely to cause instability.”

The Biden administration had opposed the effort to make reforms to the constitution and urged Moise to schedule a date for presidential and legislative elections.

“That is the position of our government; we’re making that position known,” U.S. Secretary of State Antony Blinken told the House Foreign Affairs Committee last month when asked if he thought a constitutional referendum should be held.

Earlier, U.S. State Department spokesman Ned Price told reporters that the United States will not provide financial assistance for a constitutional referendum in Haiti, although it is contributing to the presidential and legislative elections.

A constitutional referendum had been scheduled on June 27, but it was postponed to Sept. 26 amid a spike in COVID-19 cases in the country.