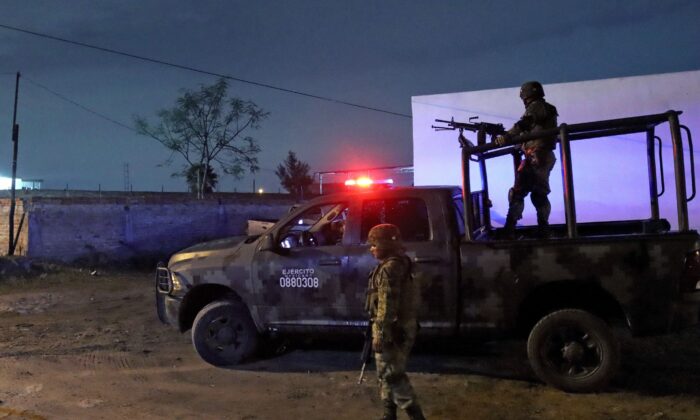 Members of the Mexican Army stand guard at the site where four police officers and eight alleged members of the organized crime were killed, and six others were wounded, in a confrontation in El Salto, Jalisco state, Mexico, on June 23, 2022. (Ulises Ruiz/AFP via Getty Images)
Americas

4 Police, up to 8 Suspects Killed in Western Mexico

MEXICO CITY—Four police in western Mexico are dead after they were drawn into an ambush-style shooting late Wednesday.

Luis Joaquín Méndez, the chief prosecutor of the western state of Jalisco, said four municipal policemen in the city of El Salto responded to a call about armed men at a house. Once they arrived, a woman answered the door and told them nothing was wrong.

But the gunmen inside used the opportunity to open fire on the police, some of whom were dragged into the home and killed.

Gov. Enrique Alfaro wrote that police reinforcements later showed up and engaged in a shootout with the suspects, killing eight of them and wounding three.