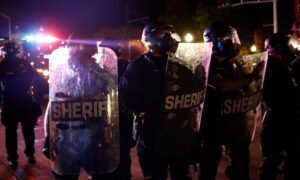 4 Ohio Children Said to Be in Danger: Multi-State Alert Issued

Officials say that four missing Ohio children are believed to be in danger, and they are asking for the public’s help in finding them.

A missing child alert was issued for states between Ohio and Florida, WKYC reported. The children were taken by their non-custodial mother, Marianne Merritt, on Aug. 28.

Officials said that the children—who are between the ages of 8 and 13—might be in danger. An AMBER Alert wasn’t issued.

According to the Lima Police Department, the missing children are identified as follows:

The suspect, Marianne Merritt, is 40 years old, and police described her as 5 feet 5 inches tall and weighing about 210 pounds. She has red hair and green eyes.

Police said that she might be traveling to Florida with her boyfriend, Charles Perkins. WKYC reported that he has active warrants and was described as being abusive towards children.

Police said he is “armed and dangerous,” and he is 5 feet 5 inches tall and weighs 164 pounds with brown hair and brown eyes.

A car that is linked to the alert is a 2000 dark blue Chrysler Voyager minivan with Ohio license plate FMQ3175. The van has a white passenger-side door.

Anyone with information about the case is being asked to contact Lima police at 419-227-4444.