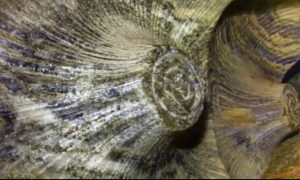 Psychedelic Salt Mine in Russia (Video)
0 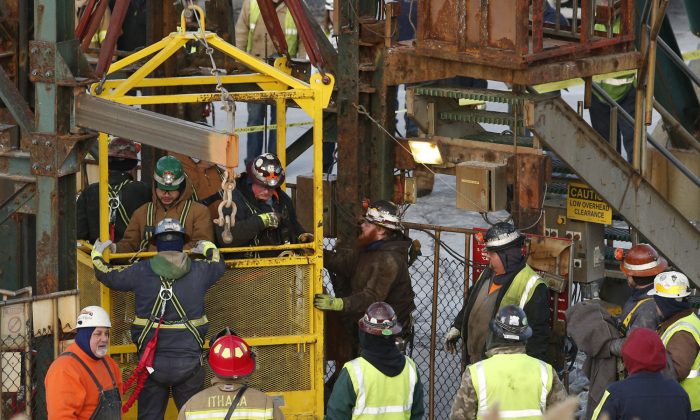 The fourth group of workers emerge from an elevator on Jan. 7, 2016, after they were stuck overnight in a shaft at the Cayuga Salt Mine in Lansing, N.Y. (Simon Wheeler/The Ithaca Journal via AP, Pool)
Crime and Incidents

LANSING, N.Y.—Seventeen miners spent a frigid night in a broken-down elevator in America’s deepest salt mine, huddling with heat packs and blankets before being rescued early Thursday, Jan. 7, a mishap that highlighted the sometimes-risky work of churning out the road salt that keeps traffic moving on ice and snow.

The workers were descending to start their shifts around 10 p.m. Wednesday when the roughly 5-by-6-foot car abruptly stopped about 90 stories below ground in the Cayuga salt mine while heading to a floor nearly deep enough to fit two Empire State Buildings stacked atop one another.

The miners would spend the next 10 hours stuck in a shaft that’s also an air intake, with night air less than 20 degrees rushing in as they tried to stay warm with heat pads, blankets and containers of coffee that were lowered down, officials said. Ultimately, a crane was brought in from 30 miles away to pull the miners to safety in a cage-like basket, a few at a time, as those gathered up top cheered.

The rescued miners, who ranged in age from 20 to 60, were checked out and found to be uninjured.

“Their spirits are tremendous. I’m inspired by them, to be quite honest with you,” mine manager Shawn Wilczynski said. “The first four that came out of the mine waited until the last two came out.”

The rescued miners, who ranged in age from 20 to 60, were checked out and found to be uninjured, and some colleagues who had already descended into the 2,300-foot-deep mine when the lift got stuck emerged safely via another route.

While authorities and mine owner Cargill Inc. were investigating what caused the problem, a spokesman for the Minneapolis-based company said it appeared that the beam that keeps the elevator’s car aligned in the shaft was bent or broken.

The malfunction came five days after a circuit breaker problem briefly knocked the lift out of service during a test trip with no one underground, according to federal Mine Safety and Health Administration records. And despite a deadly accident in 2010, mine agency official Neal Merrifield said the mine has a good safety record with a lower rate of violations and accidents than similar facilities.

While it’s not uncommon for mine lifts to get stuck, the problems rarely last as long or strand so many people as happened Thursday, Merrifield said. But he said overloading wasn’t a concern.

The mine taps into a rock salt formation under a swath of upstate New York. With about 200 workers, the mine is one of the few heavy industries in Lansing, a mostly rural town of about 11,000 residents who often commute to jobs at nearby Cornell University and Ithaca College.

The mine processes about 2 million tons of road salt per year, making it one of the nation’s biggest producers. The U.S. is second only to China as a source of all types of salt, and more than 40 percent of it goes to melting ice on roadways, the U.S. Geological Survey says.

At the mine, vertical shafts allow access to the deposits, and workers remove it using a room-and-pillar approach: blasting to loosen the salt, while leaving pillars of salt in place to support the overhead layers. Then vehicles scoop and haul the blasted salt to a miles-long system of conveyor belts.

The miners work in a ghostly world of tunnels and caverns coated in white. An Ithaca Journal reporter who visited the mine in 2002 described “chunks of salt the size of computer monitors and others the size of footballs” and a taste of salt in the air.

In general, salt mining is considered less dangerous than underground mining for combustible coal. But salt mines have had problems, including a massive collapse of a salt mine near Rochester in 1994. No one was injured, but aquifer water flowed into the mine, opening huge sinkholes above, causing a bridge foundation to crumble and sucking wells dry.

And in 2010, a 150-ton aboveground salt bin collapsed onto a truck at the Cayuga mine, killing the driver and injuring another man. Federal regulators found the management hadn’t gotten adequate inspections.

After Thursday’s rescue, Cargill made counselors available for families of the miners. And at the nearby Crossroads restaurant, co-owner John Dietershagen was offering free food Thursday to them and their rescuers.

“Lansing is a very tight-knit community,” he said. “We all support each other.”