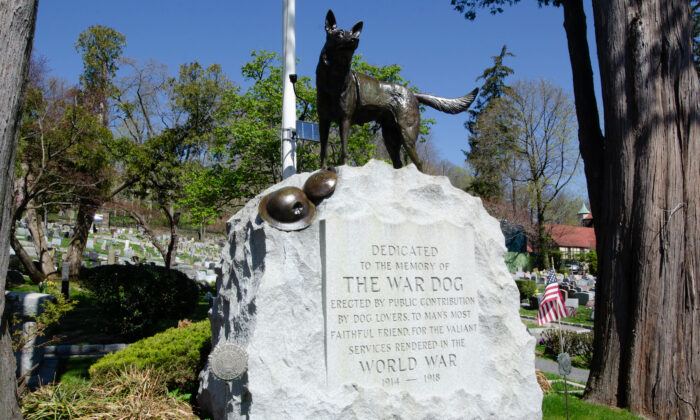 There are good dogs, there are bad dogs, and then there are hero dogs. The lives of deceased hero dogs are celebrated at the nation’s oldest pet cemetery in Hartsdale, New York, just north of New York City.

When one hears the words “pet cemetery,” it’s hard not to conjure up visions from the Stephen King horror movie of the same name. But at Hartsdale Pet Cemetery, there’s no horror but a lot of love in the form of monuments erected in memory of the animals that served mankind for the past five generations.

According to its website, “Hartsdale Pet Cemetery was founded in 1896 to address the growing need for a secure and dignified resting place for the pets of New York City.”

In 2012, it was added to the National Register of Historic Places, making it the first and only pet cemetery to receive such status.

It was in 1923 when the first memorial on the grounds was dedicated to dogs who had served in World War I.

“The proprietor of the cemetery at that time was a veterinarian named Dr. Samuel Johnson. He was a Manhattan veterinarian,” Mary Thurston, Hartsdale Pet Cemetery’s historian, told The Epoch Times. “He pitched the idea of a memorial to the dogs of war to the plot holders.”

“Johnson had a very deliberative plan,” when he put the memorial at the summit of the grounds, said Thurston. “It’s prominent throughout the valley. The war dog looks down over the valley and people down in the valley can look up and see it. It’s almost like going to the altar on the mount.”

Dogs of the Great War

The U.S. military didn’t employ service dogs during World War I. However, working side-by-side with the military was the American Red Cross, which employed them.

At first, it was the other Allies and the Germans who employed dogs on the front lines.

“But the Americans were quick to catch on how valuable they were,” she said.

The life-sized, bronze sculpture of the German shepherd in the monument wears a Red Cross blanket and harness.

Hartsdale holds two annual events: one with speakers for The War Dog Memorial each summer (including veterans who handled dogs in Afghanistan) and a blessing of the animals in the fall. The War Dog Memorial and the cemetery, in general, attract annual visitors both nationally and internationally.

For decades, military dogs that became too old for service or developed health problems were put down.

In the summer of 2000, Robby was at the end of an illustrious military career with a specialty in explosives detection. He was brought out before a crowd of D.C. dignitaries in Quantico, Virginia, to demonstrate his skills in apprehending a mock suspect in burlap-padded clothing. But as Robby dashed onto the field, he let out a cry and his hindquarters collapsed.

In that instant, Robby became the face of what would be an unprecedented national campaign to end America’s tradition of killing its own war dogs when they get too old to work.

Robby’s handler, a 26-year-old Marine lance corporal, was told that the dog was going to be taken back to Lackland Air Force Base in San Antonio to undergo “evaluation.” He feared the worst—that Robby would be put down. The young Marine pleaded with officials at Lackland to retire Robby so he could adopt him and provide a home for whatever time he had left.

His request was denied.

Eventually, Congress passed Robby’s Law, which greatly lessened the number of military dogs euthanized each year. The federal act was signed into law by President Bill Clinton, although Robby’s handler was never able to adopt him.

Robby’s ashes are buried at the foot of the War Dog Memorial.

Before 2016, it was very difficult for handlers of dogs who served overseas in the military to bring them back to the states after the dogs retired. Most often they were left in foreign countries because retired service dogs were no longer considered on active duty and therefore weren’t eligible for government-funded transportation.

That changed in 2016 when President Barack Obama signed the National Defense Authorization Act, which included a provision for the transport of retired service dogs back to the United States.

There’s a small section of the cemetery’s lower lawn reserved for civilian police dogs and there are other memorials for animals who have served in medical research and agriculture.

There’s also a cenotaph to Laika, the first living creature to orbit Earth (in the Soviet spacecraft Sputnik 2) in 1957, and another one for a fire dog.