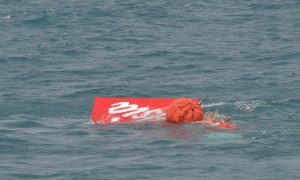 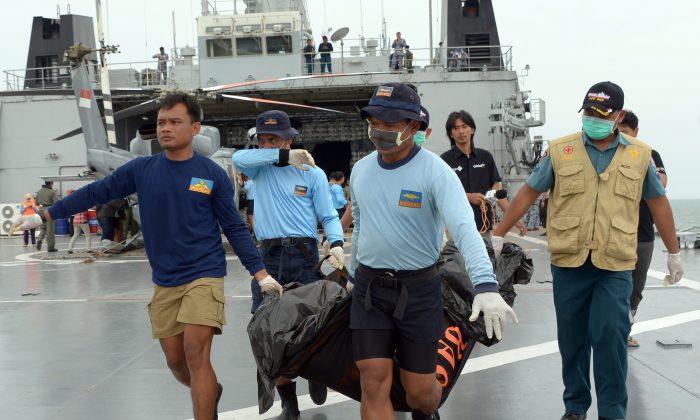 Indonesian's Navy personnel carry a bag containing a dead body of a passenger of AirAsia Flight 8501 at sea off the coast of Pangkalan Bun, Indonesia, Saturday, Jan. 3, 2015. Indonesian officials were hopeful Saturday they were honing in on the wreckage of AirAsia Flight 8501 after sonar equipment detected two large objects on the ocean floor, a full week after the plane went down in stormy weather. (AP Photo/Adek Berry, Pool)
AirAsia Disaster

PANGKALAN BUN, Indonesia—Indonesian officials said Saturday that they were confident wreckage of AirAsia Flight 8501 had been located after sonar equipment detected four massive objects on the ocean floor.

Though strong currents and big surf have prevented divers from entering waters to get a visual of the suspected fuselage, officials are hopeful they will find many of the 162 passengers and crew who were aboard the plane still strapped in their seats inside.

So far, after nearly a week of searching, only 30 bodies have been found floating in the choppy waters.

The Airbus A320 crashed Dec. 28, halfway into a two-hour flight from Surabaya, Indonesia’s second-largest city, to Singapore. Minutes before losing contact, the pilot told air traffic control that he was approaching threatening clouds, but was denied permission to climb to a higher altitude because of heavy air traffic.

It remains unclear what caused the plane to plunge into the Java Sea, though bad weather appears to have been a factor, according to a 14-page report released by Indonesia’s Meteorology, Climatology and Geophysics Agency.

“Flight 8501 appears to have been trapped in bad weather that would have been difficult to avoid,” the report said.

While the plane’s black boxes — the flight data and cockpit voice recorders — have yet to be located, the discovery of the wreckage, especially if it is largely intact, would greatly benefit the investigation.

The objects on the seafloor were discovered Friday and Saturday and a Geological Survey vessel was used to assess dimensions, Soelistyo said.

In addition to what appeared to be a significant part of the plane’s body, chunks of debris found in the target search area measured up to 12 meters (39 feet) long.

Other suspected plane parts were seen scattered on beaches during an aerial survey, Soelistyo said.

Indonesian authorities announced the grounding of AirAsia flights from Surabaya to Singapore, with the Transport Ministry saying the airline did not have a permit to fly on Sundays. However, Singapore’s Civil Aviation Authority said Saturday that from its end, the airline had been approved to fly the route daily.

AirAsia, which began operations in 2001, quickly becoming one of the region’s most popular low-cost carriers, said it was reviewing the suspension. The crash was the airline’s first.

Strong currents and towering waves as high as 4 meters (13 feet) have slowed recovery efforts, scattering bodies and debris in all directions. The discoveries so far include an emergency exit door and slide, as well as a backpack with food and a camera inside.

As part of the investigation into the crash, autopsies will be carried out on some of the bodies, including the pilot and co-pilot, whose remains have not yet been recovered, said Budiyono, who heads East Java’s Disaster Victim Identification unit and, like many Indonesians, uses only one name.

Generally, aviation experts say the more passengers, luggage and parts of the aircraft that remain intact, the more likely the plane hit the water in one piece. That would signal problems like a mechanical error or a stall instead of a mid-air breakup due to an explosion or sudden depressurization.

For family members, the wait has been agonizing, with local media covering every development and theory, many of which have proved to be untrue — including a false report that a body was found wearing a life jacket, which would have indicated passengers had time to prepare for the impact or miraculously were able to put them on after hitting the water.

With more corpses arriving in Surabaya, some relatives said they were simply worn out. But they were encouraged by reports that parts of the plane had been detected and hoped that everyone on board would be retrieved.

“Let’s hope the news is true,” said Ongko Gunawan, whose sister was on the flight with her husband and their child. “We need to move on.”

Vessels involved in the search for debris included at least eight sophisticated navy ships from Singapore, Russia, Malaysia and the U.S. equipped with sonars for scouring the seabed to pinpoint the all-important black boxes and the wreckage.

A second U.S. Navy ship arrived Saturday to help in the search.

The hope, officials say, is that the body of the plane will still be largely intact, speeding the investigation.

“Many of the passengers believed to be still trapped inside the plane’s fuselage and could be discovered soon,” Supriyadi said. “God willing, we will complete this operation next week.”