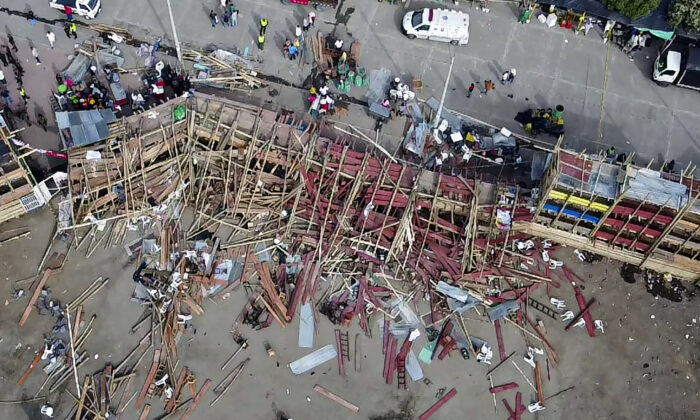 Aerial view of the collapsed grandstand in a bullring in the Colombian municipality of El Espinal, southwest of Bogotá, on June 26, 2022. (Samuel Antonio Galindo Campos/AFP via Getty Images)
Americas

BOGOTA, Colombia—Four people were killed and about 70 injured on Sunday when part of a stand collapsed at a bullring in the town of El Espinal, Colombia, provincial officials said.

Videos posted on social media showed the section of the stand toppling forward into the ring, where locals were participating in a bull-running event tied to the feast day of Saint Peter and Saint Paul.

“There are four dead at this moment—two women, a man, and a minor,” Tolima provincial governor Jose Ricardo Orozco told local Blu Radio.

No one remained trapped in the wreckage, Major Luis Fernando Velez, director of civil defense in the province, told local Caracol television, and several people reported as missing have been found.

“The emergency has been overcome at the site of the incident. More or less 70 people were injured,” Velez said.

Ambulances were sent from the nearby cities of Ibague and Melgar to help the injured, who have overwhelmed El Espinal’s hospital, Velez said, adding he did not know exactly what the stand was constructed with but it appeared to be wooden boards.