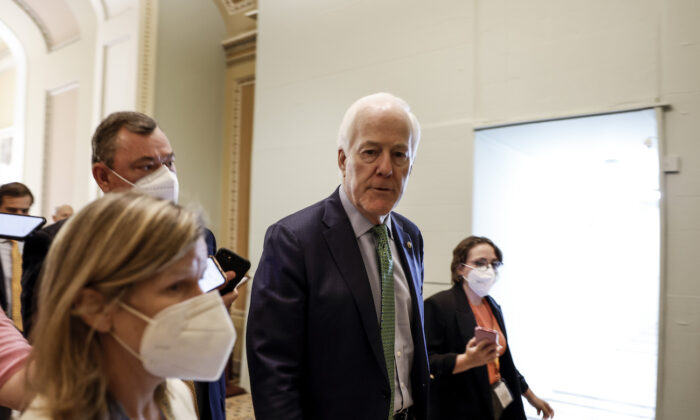 Sen. John Cornyn (R-Texas) speaks to reporters as he walks to the Senate Chambers of the U.S. Capitol in Washington, on June 21, 2022. (Anna Moneymaker/Getty Images)
Congress

The Senate voted on June 21 to advance newly unveiled bipartisan gun legislation, with 14 Republicans joining all 50 members of the Democratic caucus in a 64–34 procedural vote.

The bill, which would be the most sweeping gun safety package approved by Congress in decades, includes key proposed changes to existing law.

A 1996 amendment to the Federal Gun Control Act barred people convicted of “a misdemeanor crime of domestic violence” from buying or owning a gun.

Critics have been trying to get lawmakers to broaden the law to apply to people who commit crimes against their boyfriend or girlfriend. Gun control groups refer to the issue as the “boyfriend loophole.”

“A casual acquaintanceship or ordinary fraternization in a business or social context does not constitute a dating relationship of a romantic or intimate nature,” the proposed language states.

The bill would also add people convicted of domestic violence who are in dating relationships to the National Instant Criminal Background Check System (NICS).

Nineteen states have laws that enable courts to strip people of their constitutional rights to own a gun. They are known as “red flag” laws, and have resulted in thousands of Americans being ordered not to possess guns because of concerns about their mental health.

The new measure would utilize grants from the Byrne Memorial Justice Assistance Grant program to support states that impose such laws, or already have them in place.

It would do so by altering the Omnibus Crime Control and Safe Streets Act of 1968.

Under that legislation, the attorney general is authorized to make the grants to state and local governments “to provide additional personnel, equipment, supplies, contractual support, training, technical assistance, and information systems for criminal justice.”

The new legislation would add “civil proceedings” after “criminal justice” and state that the grants can go towards “implementation of State crisis intervention court proceedings and related programs or initiatives” such as “extreme risk protection order programs,” or the red flag laws.

In order for the programs to receive grants, they must include certain rights for the accused, including the right to an in-person hearing before the courts rule on attempted enforcement, and the right to present evidence.

When individuals under the age of 21 attempt to buy a firearm, more intense background checks would kick in if the proposal is enacted.

While some Democrats have hoped for an outright ban on firearm sales to individuals under 21, the compromise bill wouldn’t go as far. Instead, it would bolster the NICS to more thoroughly examine juvenile criminal records.

In addition, it would impose a three-day waiting period between an attempt to purchase a firearm and the actual purchase. If NICS finds a potentially disqualifying record in need of further investigation, that waiting period is extended to 10 days; at the end of that period, if the firearm dealer hasn’t been informed that a purchaser is disqualified from possessing a firearm, the sale is allowed to go through.

To counter this, the bill includes a provision providing for the removal of “false, expired, or erroneous records” to ensure that qualified buyers aren’t flagged under the expanded NICS requirements.

A significant portion of the bill focuses on expanding access and funding to mental health programs as preventative measures against future mass shootings.

The bill would furnish about $15 billion over the next five years to expand mental health access and enhance school security, first to be distributed to states that propose a comprehensive pilot program for using the funds.

More than a dozen new initiatives, including creating a network of “community health behavioral centers” and expanding access to telehealth services, are included in the bill.

To offset the $15 billion expenditure, the measure would delay a Medicare drug rebate program for one year, which proponents say would save the federal government $21 billion.

Another focus for GOP negotiators was enhanced school security, and much of the $15 billion appropriation would be devoted to this end.

The legislation emphasizes programs for early identification and intervention with students who may become a threat to other students or teachers. As a corollary, the bill would expand resources for school mental health services.

$300 million of the bill is exclusively devoted to instituting stricter safety measures at schools and providing training to school staff and students.