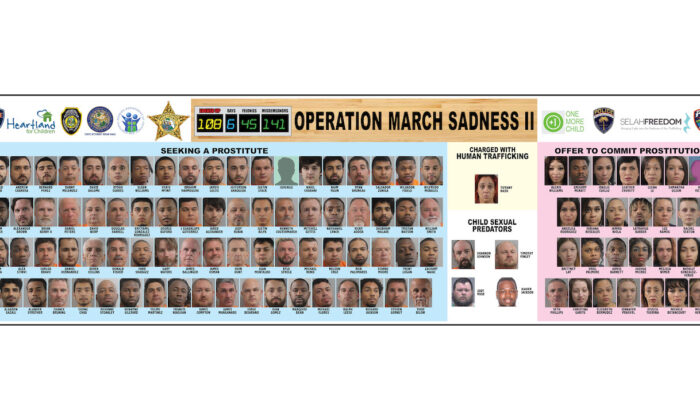 An operation by the Polk County Sheriff’s Office in Florida that focused on human trafficking, prostitution, and child predators resulted in the arrest of 108 people, among them four Walt Disney Co. workers and a former county judge.

The six-day undercover operation, called “Operation March Sadness 2,” started on March 8. According to a statement from the Polk County Sheriff’s Office, detectives sought to identify and free any victims who were being forced into prostitution, and identify anyone participating in the human trafficking. They did that by seeking out people who posted online advertisements for prostitution as well as those who sought out the prostitutes through online communications.

Detectives also investigated adults who spoke in a sexually charged manner online with those whom they believed to be children. A total of four men were arrested for preying on children online.

Polk County Sheriff Grady Judd told a news conference that among those arrested was a Disney employee who is now alleged to be a child predator.

Xavier Jackson, 27, was alleged to have sent sexual images of himself and graphic descriptions of what he wanted to do, to an undercover detective posing as a 14-year-old girl. He was also allegedly bragging about having worked as a lifeguard at Disney’s Polynesian Village Resort at Walt Disney World Resort in Florida, Judd said.

Jackson was charged with three counts of transmission of material harmful to a minor and one count of unlawful use of a two-way communication device.

Three other Disney workers were arrested for having each attempted to solicit a prostitute. They were identified as Wilkason Fidele, 24, Shubham Malave, 27, and Ralph Leese, 45.

Fidele worked at Walt Disney World’s Tomorrowland at the Cosmic Restaurant for four years. Malave, who is on a work visa from India, worked as a software developer for Disney. Leese has worked in information technology for Disney for nearly four years, and is married.

“I’m sure Disney’s not pleased. I bet his wife’s not pleased, but we’re pleased that we arrested him,” Judd said of Leese.

Disney confirmed that Leese, Fidele, and Jackson have been placed on unpaid leave, and that Malave isn’t an employee of the company, CBS News reported. Company officials didn’t respond by press time to a request by The Epoch Times for comment.

Prostitution is illegal in the vast majority of the United States, with the exception of 10 counties in Nevada.

Another notable arrest was that of 66-year-old Daniel Peters, a retired judge from Illinois, who was charged with soliciting a prostitute. Judd said that Peters told detectives that he was a retired judge in Cook County, and was a special assistant in legal affairs with the Cook County Sheriff’s Office.

The operation resulted in the arrests of a human trafficker and four child predators, which “makes this whole operation worthwhile,” Judd said in a statement.

“The online prostitution industry enables traffickers and victimizes those who are being trafficked. Our goal is to identify victims, offer them help, and find and arrest those who are profiting from the exploitation of human beings. Johns fuel the trafficking and victimization,” he said. “Where there is prostitution, there is exploitation, disease, dysfunction, and broken families.”