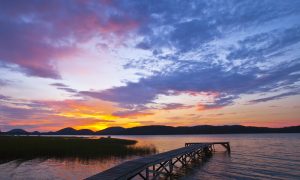 New York State police and the Federal Aviation Administration said Saturday the Piper PA-46 plane went down around 6:30 p.m. Friday in the woods a half-mile northwest of the Adirondack Airport in Lake Clear. It’s about 50 miles south of the Canadian border.

The identities of the dead have not been released.

He says the plane was registered to someone in the Rochester area.