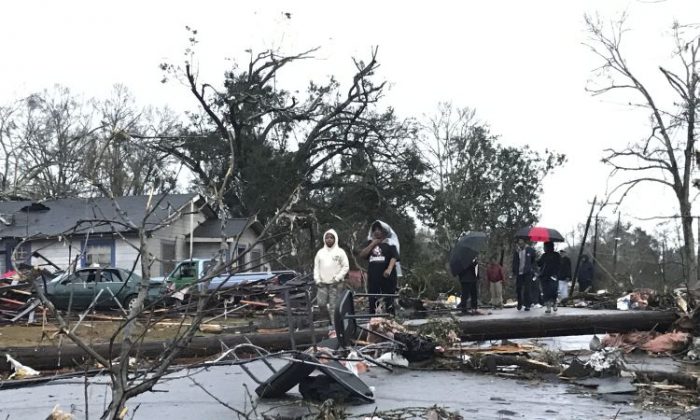 Trees and debris cover the ground after a tornado tornado ripped through the Hattiesburg, Miss., area early Saturday, Jan. 21, 2017. Mayor Johnny DuPree has signed an emergency declaration for the city, which reported "significant injuries" and structural damage. (Ryan Moore/WDAM-TV via AP)
US

Four people were killed, roofs were ripped from homes and churches, and trees were torn from the earth early Saturday when a tornado hitting in the dark of night ripped through a region in southern Mississippi, officials said.

The city of Hattiesburg said via its Twitter account that four people had died after the twister blew through the city and surrounding area. The twister was part of a wall of stormy weather traveling across the region, bringing with it rain and unstable conditions.

On Bernice Avenue south of downtown Hattiesburg, Edna Smith was surveying what was left of the tan brick house she’d lived in since 2005.

Her parrots had been spared but the tornado ripped off most of her roof, dumping it in the backyard and alley behind her house. Her neighbor’s porch roof blew into her carport, slamming her car into a brick wall.

“It woke me up and half the roof was gone,” said Smith, who is already the survivor of one natural disaster. She moved to Hattiesburg after 2005’s Hurricane Katrina displaced her from her suburban New Orleans home.

Rain cascaded down onto the roofless house turning wallboard into mud and soaking upholstered furniture.

Mayor Johnny DuPree has signed an emergency declaration for the city, which reported “significant injuries” and structural damage.

The city also said via Twitter that Hattiesburg firefighters and police are going door-to-door to try to rescue victims.

More than 40 firefighters from across Mississippi had gathered outside Hattiesburg police headquarters to search for the dead and injured. Equipped with dogs and all-terrain vehicles, they were planning on doing a grid search from police headquarters to nearby William Carey University in one of the most heavily damaged areas.

Greg Flynn of the Mississippi Emergency Management Agency said “massive damage” was reported across a three-county area that was struck by a tornado at around 4 a.m.

Photos and television images showed the intensity of the damage. Cars were flipped over, sometimes piled on top of each other while parts of houses were ripped into shards of wood and debris.

Once tall trees were ripped from their roots and thrown across roads.

As dawn rose over the city, rescue workers and residents walked down streets strewn with debris and still wet from the storm.

Thousands of customers in southern Mississippi were without power due to the severe weather that pummeled the region. The three major power companies in the area reported nearly 13,000 customers in the dark. The bulk of those were in Forrest County where the tornado struck early morning.

A college in one of the most heavily affected areas said Saturday it was closing down and students being evacuated.

William Carey University, a Christian university with a campus in Hattiesburg, said on its Twitter feed that the campus is closed until further notice. Its Tradition campus near the coast is still open.

Students were being escorted from the Hattiesburg campus and arrangements are being made for students who can’t go home.

The university said some students had minor injuries, and some dorms were damaged.

Photos posted on the university’s Twitter feed showed vehicles in a parking lot flipped over and parts of a brick building ripped down.

The three counties affected are Forrest, Lamar and Perry counties. Flash flood warnings were also in effect for northern Forrest and Lamar counties, as well as southeastern Jones and Marion counties.

The National Weather Service said three to five inches of rain have already fallen, raising the risk of flooding. More rain — one to two inches — is possible.

The Mississippi Highway Patrol reported Interstate 59 north of Hattiesburg was closed due to debris. Downed power lines and debris have been reported over a wide area. The public is asked to avoid travelling.

Flynn said the tornado touched down in Lamar, plowed through Forrest and then struck Perry before dissipating.