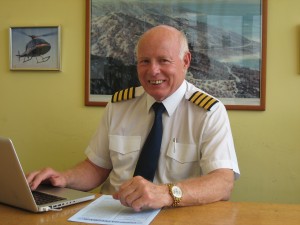 Captain Mike Green, one of the four victims who was killed in the midair crash in the U.K. on Nov. 17. (Helicopter Services)
UK

4 Dead after Midair Crash in UK

Four people are dead after a helicopter and a light aircraft collided over Buckinghamshire in the United Kingdom on Nov. 17.

The crash occurred shortly after midday and the wreckage of the two-seater plane and helicopter have been located at Upper Winchendon near Rothschild family’s Waddesdon manor, police said in a statement on Nov. 17.

Three of the four victims have now been identified.

Capt. Mike Green, a senior flight instructor, was flying the two-seater helicopter, which had taken off from Wycombe Air Park. He was also carrying another passenger on a “gift sight-seeing tour,” reported MailOnline.

Many of Green’s former colleagues and friends paid tribute to the well-loved pilot.

Former colleague Capt. Phil Croucher told the news station: “I shared a cup of tea with him only on Thursday morning. He was a true gentleman. He was probably the most well-respected instructor in the country. He achieved a very high position within the army as an instructor.

“He was an absolutely dedicated instructor. If you wanted a training instructor there’s no one more highly qualified. Almost everybody in the country has been instructed by him. Most instructors have been trained by him.”

The plane, a Cessna 152, which is primarily used for flight training, also left Wycombe Air Park about 15 minutes prior to the crash, according to MailOnline.

It was carrying student Saavan Mundae and flight instructor Jaspal Barha—both were tragically killed. Mundae, 18, from Isleworth, studied Aeronautics at Kingston College and was training to become a commercial pilot.

Specialist crash investigators are currently working to find out what exactly happened. These aircrafts are fitted with black box flight data recorders, which are normally found in commercial planes.

“Officers are in the process of working to locate and support their next of kin. The Air Accidents Investigation Branch, the AAIB, has been informed and their staff have been on the scene,” police said in a statement. “These are the early stages of the investigation, however Thames Valley Police will continue to work closely with investigators as they establish the circumstances.”

Please see our latest update in relation to the incident in Waddesdon, Bucks: https://t.co/MtuKFijmb8

A local resident told MailOnline that his father had heard a loud bang.

“He ran up to the scene. It was clear pretty quickly that no one has survived,” the resident said.