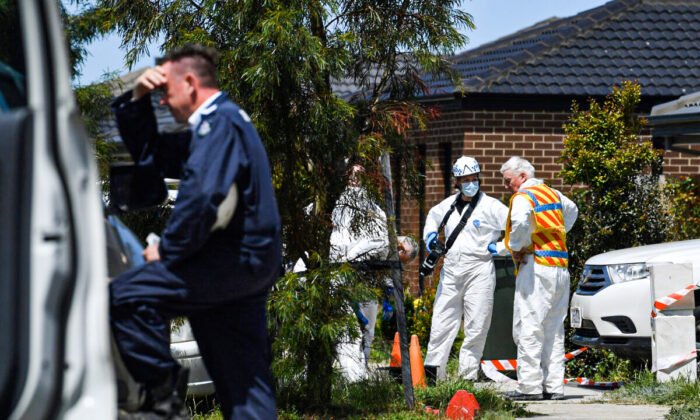 Emergency services at the scene of a house fire at Werribee in Melbourne, Australia, on Nov. 21, 2021. (AAP Image/Joel Carrett)
Australia

Four children under 10 have died and their parents and an eight-year-old brother are in hospital after a house fire in Melbourne’s southwest.

Firefighters were called to Mantello Drive in Werribee just before 1am on Sunday, to find the roof of a property engulfed in flames.

“Fire had already broken through the roof and was already coming out the front door,” he told reporters on Sunday.

“We were made aware of three people that had escaped the fire.”

Four children were trapped inside the house, but the intensity of the blaze made it difficult for crews to find them.

“With the roof already being compromised and the tiles collapsing, it was unsafe for our members to be able to proceed initially,” Molloy said.

“With the distress of the parents and eight-year-old, it was difficult to get accurate information early on to focus our search areas.”

It took about 40 firefighters just under an hour to bring the fire under control.

Two girls, aged one and six, and two boys, aged three and ten, were found dead inside the house.

Their parents and another boy, aged eight, managed to escape the fire and are in hospital.

One firefighter was assessed by paramedics for chest pain.

“The fire itself we have seen many times before, but the complexity involves having four children trapped inside the house,” Molloy said.

He said fire crews felt “in a way, a little bit helpless” because they wanted to get into the house to find the children.

“We’re not wanting to put ourselves at that level of risk to have, what was likely to be, a recovery situation from the outset,” he said.

Victoria Police arson and explosives detectives are investigating the cause of the fire and will prepare a report for the coroner.

Detective Senior Sergeant Ashley Ryan said he could not say whether the fire was suspicious.

He did not comment on reports it may have taken 10 minutes to contact triple zero after the blaze erupted and said investigators are speaking to the surviving family members at hospital.

“It is a terrible set of circumstances and one that is very difficult for members of the family, and our hearts go out to the family and to the community this morning,” Ryan said.

“But also very distressing for members of Victoria Police and emergency services, given the circumstances of what’s occurred.”