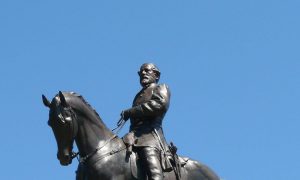 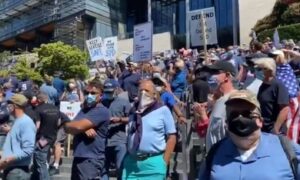 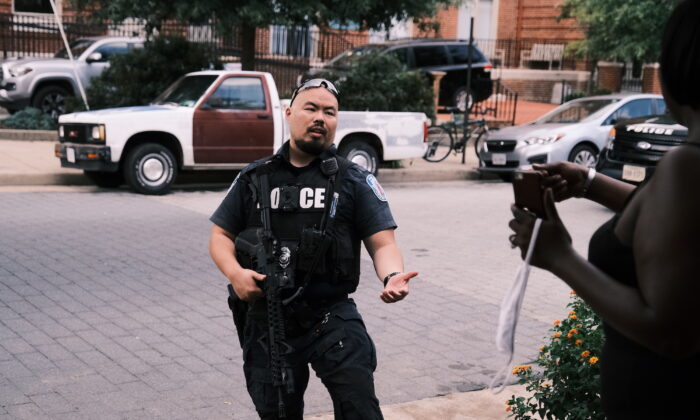 A policeman speaks to a bystander in Richmond, Va., on Aug. 8, 2020. (Eze Amos/Getty Images)
Crime and Incidents

The mayor of Richmond, Virginia, is denouncing riots that rocked his city as a “clear hijacking” of the Black Lives Matter cause, while police made four arrests in connection with the unrest.

Levar Stoney, who is black, made the remarks during a COVID-19 briefing on Aug. 12.

After detaining an undisclosed number of individuals just before midnight, Richmond police charged four of them, according to the Richmond Times-Dispatch. Among the items recovered from the suspects were a hammer and a metal crowbar, officials said.

Stoney detailed some of the damage and condemned the actions of those responsible.

“Last night, a group by the name of Richmond Strike led a rash of property damage and vandalism to public and private buildings in our city,” he said.

The Epoch Times reached out to Richmond Strike, which calls itself “an autonomous decentralized network for direct action in the colony called Richmond,” for comment but didn’t immediately receive a response.

Damage included dozens of broken windows, including 22 at the John Marshall Courthouse in downtown Richmond, forcing the building’s closure. Repairs to the building could cost taxpayers hundreds of thousands of dollars, said Stoney, who rejected as “unacceptable” the violence and vandalism.

“It’s wrong and it undermines any sort of mission behind the cause of Black Lives Matter,” he said.

Stoney lamented that money from city coffers that could be going to improve peoples’ lives will instead be spent on fixing windows.

“So it is in conflict of what these people say that they are standing for. And I will say this—there are folks who are hijacking what … this initially began about a racial reckoning in the city and in this country, a clear hijacking of that cause.”

“If you are involved in any riotous behavior, violence during any protest, we will charge you with all applicable offenses.”

In a tweet, Stoney said: “Those working peacefully for change are welcome here. Those intent on creating chaos and confrontation, who riot and commit violence against our community, will go to jail. Period.”

Colette McEachin, a prosecutor, echoed the mayor’s view that the actions of the rioters were misguided, in remarks to the Richmond Times-Dispatch. She said the closure of the John Marshall Courthouse forced the postponement of the sentencing hearing in the case of a man convicted in the second-degree murder of a 9-year-old girl.

“Talk about justice delayed,” McEachin said. “Markiya Dickson’s parents aren’t getting justice today. Anyone seeking eviction assistance from the Legal Aid attorney on the second floor isn’t getting the help they need today.”

The reform-minded protests that followed the May 25 police-custody death of George Floyd in Minneapolis have in many cases morphed into bouts of vandalism, looting, and violence. In some cities, federal authorities have been deployed to assist local law enforcement, sparking pushback from some local lawmakers.