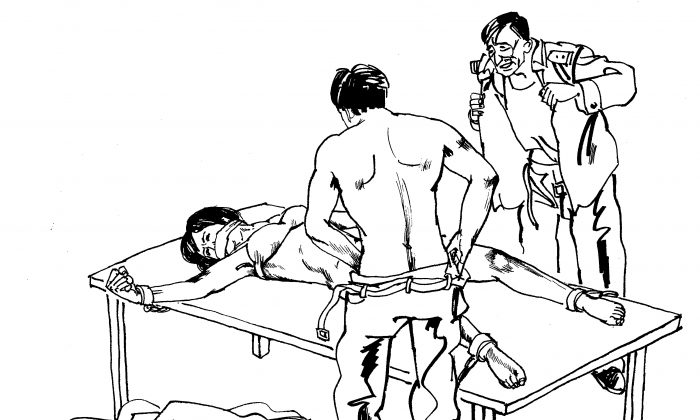 In December 2005, human rights lawyer Gao Zhisheng published his third open letter to top Chinese officials calling for an end to the campaign of persecution of Falun Dafa (also called Falun Gong) practitioners launched by the Chinese Communist Party in 1999. He had travelled to several provinces to investigate abuses against practitioners while they were detained, and he included some of their accounts in the letter.

“Our investigation has shown that the system of re-education by labour, in its illegal deprivation of freedom, has been abusive beyond imagination,” Gao wrote.

Following are excerpts from four practitioners’ accounts included in the letter, titled “We Must Immediately Stop the Brutality That Suffocates Our Nation’s Conscience and Morality.” The excerpts are only a small example of the vicious torture these four practitioners endured over repeated detentions.

“The swarm of inmates struck and kicked me from every side. I passed out. They dropped me on the floor and forcefully stepped on my face and arm to see if I was faking. When I woke up, I could not move my left arm, for my elbow was dislocated.

“I still refused to renounce Falun Dafa. They stripped me naked, and several inmates began pinching my breasts, plucking my pubic hair, and stabbing my vagina. They used a brush that usually cleaned the water tank. They then put a basin under my lower body to see if I was bleeding. Since no blood came out, the inmates switched to a larger brush and repeatedly stabbed my vagina with it.

“What I had suffered in the camp was not the most brutal. Another practitioner named Ms. Wang Lijun was tortured in the small metal cage three times. Inmates tied many knots on a thick rope and pulled it back and forth in a sawing motion across her vagina. Her entire lower body swelled up. The head policewoman then ordered inmates to jab her swollen vagina with the thorny end of a broken mop stick. This torture caused Ms. Wang’s vagina to bleed profusely. Her abdomen and vagina were so swollen that she could not pull up her pants, sit, or urinate. Ms. Wang still could not sit upright two months after the sexual torture. Her legs were also disabled. I also witnessed these inmates applying this same torture on a virgin. The head police officer also put venomous bugs on female practitioners’ bodies.”

“Because there was not any good skin remaining on my body [due to many days of torture], the policemen started to shock my private parts with electric batons and pierced them. Afterwards they used an iron rod to smash my private parts. I passed out.

“Half an hour later they came out to see if I was still alive. I did not know how much time passed before morning arrived. I was already at the brink of death. I was carried to the Changchun City police department. There were many small cells, each with a tiger bench inside. There were female Dafa practitioners on every tiger bench. Most of them had fainted, with their lower bodies naked or with only a cloth covering the body.”

“We, the female practitioners, were all stripped naked and tied with limbs spread apart on a bed board for over 26 days. We suffered incessant humiliation and sexual assault from male police, doctors, and inmates.

“They handcuffed my hands behind my back and put a cloth bag on my head. They used a rope to tighten the bag on my neck so that I couldn’t see anything and I could hardly breathe. Then they tied me up using ropes and put me in the trunk of the police car. They drove to a mountain where they brutally tortured Falun Dafa practitioners at will. Many fellow practitioners were tortured to death in this place. Mr. Liu Haibo was stripped of all his clothes and forced to kneel down. Police pushed the longest electric baton they could find into Liu’s bottom and gave his organs electric shocks. He died immediately.

“They did not allow me to sleep for five days and nights. My hands were handcuffed behind my back the entire time. They put lit cigarettes into my nostrils and mouth. My mouth was filled with cigarettes. At one time, a policeman hit my head with an iron club.

“On June 4, Mr. Liu Yonglai, Mr. Qu Fei, Mr. Huang Wenzhong, and myself were brought to the 4th floor. They took off all of Liu Yonglai’s and my clothes and handcuffed us together face to face. They used six electric batons on both of us, and shocked us on our heads, backs, thighs, genitals, both sides of our chests, and necks.

“The electric shocks continued for about one hour, and then they separated us. They handcuffed Liu’s hands behind his back and made him crawl on the grass. They put two chairs on his back and asked two criminals to sit on the chairs. Then, another six criminals used six fully charged electric batons and repeatedly shocked his back, buttocks, neck, calves, soles of his feet, and genitals at the same time. They even pulled out his penis to shock it separately.”