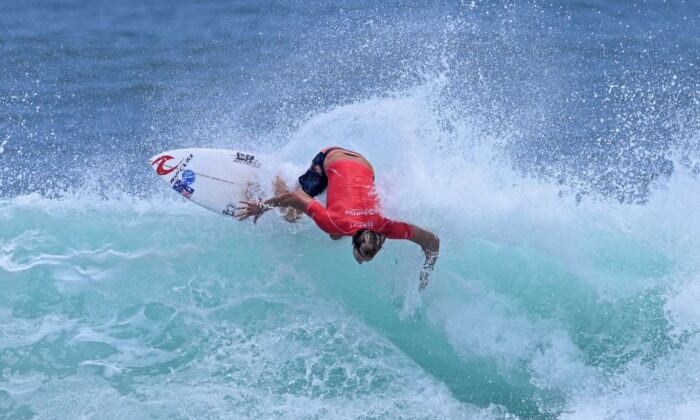 Four Aussie Men Through to Quarter Finals at Bells Beach

The Aussie male surfers are shredding at the Rip Curl Pro Bells Beach, Australia, with four winning their round of 16 heats on Friday to qualify for the quarter-finals.

Owen Wright, Ethan Ewing, Callum Robson, and Jack Robinson have all qualified, making this the best performance the Aussie men have put together since the 2022 Championship Tour began at Pipeline, Hawaii in early February.

It was a battle of the goofy footers in Wright’s heat, as he took on Nat Young of the U.S., who was in equally good form.

Both surfers looked superb in the clean head-high to double overhead Bells conditions, with a classic vertical attack that backhand surfing lends itself to.

Wright got the better of the exchange, taking the heat 16.40 to 15.77, to secure a berth in the first quarter-final against Ethan Ewing, who won his round 16 heat convincingly.

Callum Robson brought four-time world champ Mick Fanning’s Bells run to an end in a tight heat that went down to the wire.

The 40-year-old Fanning, who gained a wild card entry into the event, showed glimmers of brilliance but was beaten 14.50 to 14.27 in a great matchup.

Fanning was still in front with a minute to go, but Robson took off on a gem just before the buzzer, leaving the crowd in suspense as the judges reached their verdict, a 7.77 for Robson, taking him past Fanning’s total and booking him a place against Miguel Pupo of Brazil in the third quarter-final.

In another tight exchange, Jack Robinson took down Hawaiian Imaikalani de Vault 16.04 to 14.53, taking Robinson through to the fourth quarter-final against the ever-dangerous Italo Ferreira of Brazil.

However, despite the Aussie dominance on Friday, the overall stand-out performer in the men’s competition has been Hawaiian John John Florence, who scored 18.86 in the round of 32 and 17.77 in the round of 16.

The two-time world champion and 2019 Bells victor is in devastating form, and in the current big and clean Bells conditions, will be hard to stop. He faces the dynamic Filipe Toledo of Brazil in quarter-final two.

Meanwhile, in the women’s event, two-time world champion Australian Tyler Wright is on fire, taking out her quarter-final on Friday with another 17 plus score for her two best waves—which included a 9.00—in her commanding win over fellow Aussie Bronte Macaulay.

The 28-year-old looked confident, with great speed, the timing of turns, and commitment to the end section.

This comes after she landed a 17.24 in her round of 16 heat on Wednesday, fetching a 9.07 for her best wave, and defeating in-form rookie Gabriela Bryan of Hawaii.

Wright will now come up against American Courtney Conlogue in the first semifinal, while Costa Rican Brisa Hennessy, who won the second event on the tour at Sunset Beach, will face current world champion Carissa Moore of Hawaii.

The competition is set to continue on Saturday morning, waves permitting.