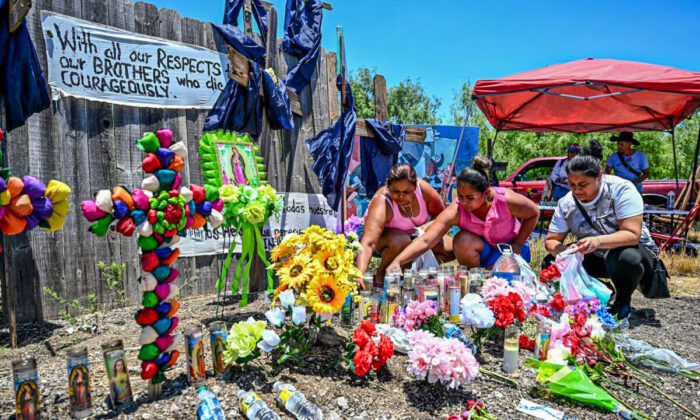 People place flowers and candles at a makeshift memorial where a tractor-trailer was discovered with deceased illegal immigrants inside, near San Antonio, Texas, on June 29, 2022. (Chandan Khanna/AFP via Getty Images)
Immigration & Border Security

Four people have now been arrested in connection with the people-smuggling operation that resulted in the deaths of 53 people in the back of a sweltering semi-trailer near America’s southern border, according to the Department of Justice.

If convicted of the crimes, both Zamorano and Martinez face up to life in prison or possibly the death penalty.

Zamorano was identified as the truck’s driver after Laredo Sector Border Patrol provided Homeland Security Investigations (HSI) agents with surveillance footage of the truck driving through an immigration checkpoint.

“The driver could be seen wearing a black shirt with stripes and a hat. HSI agents confirmed Zamorano matched the individual from the surveillance footage and was wearing the same clothing,” the DOJ said in a statement.

Meanwhile, a Texas court heard that authorities identified Martinez by investigating cellphone communications he had with Zamorano about the smuggling operation, the department said.

Two Mexican nationals, Juan Francisco D’Luna-Bilbao and Juan Claudio D’Luna-Mendez, were arrested on Monday. The men were arrested on firearm-related offenses after exiting a San Antonio property listed as the registered address of the truck used in the smuggling operation.

The number of deceased individuals from the attempted people-smuggling operation has increased to 53 since it was discovered on Monday.

Authorities were alerted to the situation by 911 calls. San Antonio police responded to the calls and discovered multiple people, many dead and some incapacitated, strewn across the ground and in the nearby brush, and some still inside the truck’s trailer, the DOJ said.

Officers said their bodies were hot to the touch after temperatures at the location had swelled to a high of 103 degrees Fahrenheit (around 39 degrees Celsius).

San Antonio police officers found and detained Zamorano, who was hiding in the brush near the truck after he attempted to abscond.

Among the victims were 22 Mexican nationals, seven Guatemalan nationals, two Honduran nationals, and 17 of unknown origin but suspected to be illegal aliens, the DOJ said.

The nationality make-up of the victims had not previously been fully known. The illegal immigrants were identified with digital fingerprint technology.