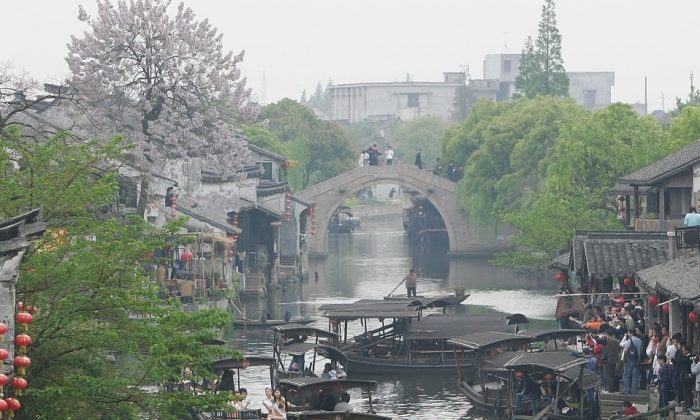 4 Ancient Chinese Villages (That Are Still Around Today)

Due to a long history of invasions, famines, civil wars, and more recently, destructive communist social campaigns and breakneck “zombie development” in real estate, many Chinese communities have lost much of their way of life, starting with their spatial and architectural heritage.

But there will always be exceptions. Some villages, by luck or design, have had the fortune to hold out against calamity and modernity to preserve their age-old dwellings and environs. Below are four examples:

It’s where Tom Cruise leapt onto roofs and vaulted over walls in “Mission Impossible 3.” It’s been visited by beauty pageant contestants. But long before any of that, the town of Xitang in eastern China began its history as a staging ground for a valiant ancient general.

Two thousand five hundreds years ago, China was entering into a 300-year period of civil war, known as the Warring States Period. One of the first and most iconic conflicts in this time was that between the states of Wu and Yue. Xitang was established when the general Wu Zixu dug out a canal to help his troops ferry provisions to the front.

Surprisingly Advanced Ways the Ancient Chinese Bathed and Did Laundry

Later, the riverway, located between Shanghai and the provinces of Zhejiang and Jiangsu, was used for more peaceful purposes. More canals have been dug out over the ages, forming 122 small alleys with homes built directly on the water. Most transport and trading is done by boat.

As a local folk saying goes: “the water is from the Spring and Autumn Period, the town is from the Tang and Song dynasties, the buildings are from the Ming and Qing, and the people from today.”

Viewed from the nearby hills, the Bagua Village in Lanxi, Zhejiang Province, looks like a piece of art. This town of 4,000 has been built in the shape of the Taoist Bagua, or Eight Trigram symbol, and not to attract tourists.

The village was meticulously designed several hundred years ago, in the Yuan Dynasty, by architect Zhuge Dashi. The dwellings were destroyed and rebuilt over the years—two hundreds examples from the Ming and Qing dynasties remain.

At the center of the village is a round space in the form of the Taoist Tai Chi symbol, with the yin (dark side) being a pool, and the yang (light side) being solid ground.

Extending out from the Tai Chi are radial streets dividing the village into its eight sections, which correspond to the Eight Trigrams. The Trigrams are an ancient tool used in divination and fortune-telling, and said to have been passed down by the god Fu Xi.

Zhuge planned the village with thought to its security and harmony. Rather than having doors to different housing units be placed opposite each other, he had them built at different intervals, ensuring that families would be able to maintain a healthy distance to avoid conflicts. At the same time, the village’s maze-like layout confuses strangers and deters crime by outsiders. It also aids in collective defense.

Zhuge Dashi is a descendant of the master strategist and Taoist cultivator Zhuge Liang, famous for his role in the Three Kingdoms era. Most of the villagers are also descended from the legendary figure.

A Town Without Walls

Located in Yunnan Province on China’s southern frontier bordering Burma and India, the town of Lijiang, home to the Nakhi ethnic minority, is notable for its lack of walls.

A UNESCO World Heritage Site, Lijiang sits at an altitude of 2,400 meters (about 8,000 feet) above sea level. Its history dates back to the Yuan Dynasty, and third of its inhabitants still work in traditional crafts and commerce manufacturing bronze and silverware, or working at looms and breweries.

Architecture in Lijiang is a unique mix of Chinese, Tibetan, and Nakhi ethnic styles. A defining landmark is the 20-meter-tall Wufeng tower, built in 1601 during the Ming Dynasty.

A Piece of Tibetan Glory

For most of China’s history, Tibet was not a territory governed by the emperor, but a powerful neighbor. While Tibetan culture and customs have suffered much destruction in recent history, one particularly complete example of a Tibetan village, Dukezong in Yunnan Province, survived relatively unscathed.

Built about 1,300 years ago during the Tang Dynasty, Dukezong lies on the ancient tea and salt trading route connecting Yunnan with Burma. It was originally built as a military stockade for Tibetan troops, and the name itself means “castle built on the rocks.”

A unique ancient product of Dukezong is a knife of such high quality that it can easily slice through nails without damage, as demonstrated in a report by the state-run China Central Television.

Unfortunately, Dukezong was ravaged by a major fire in 2014 that destroyed hundreds of homes. It is currently under restoration.