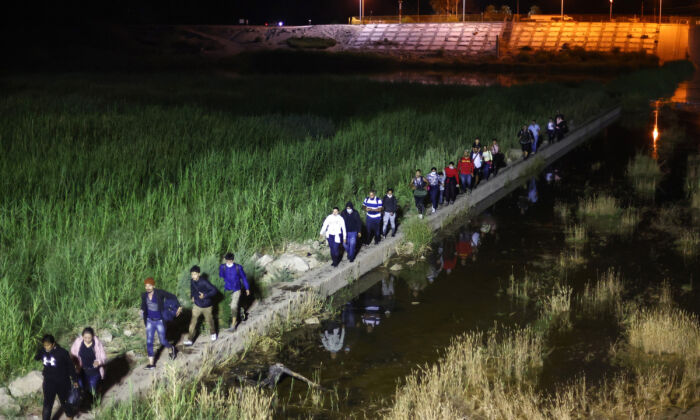 Illegal immigrants walk from Mexico into the United States on their way to await processing by the U.S. Border Patrol in Yuma, Ariz., on May 23, 2022. (Mario Tama/Getty Images)
Immigration & Border Security

Nearly 5 million illegal immigrants have crossed U.S. borders in the 18 months since President Joe Biden took office, according to a new report.

A total of 4.9 million illegal aliens, including some 900,000 “gotaways” who evaded apprehension and have since disappeared into American communities, have entered the country by the end of July, the Federation for American Immigration Reform (FAIR) said in a statement on Aug. 16.

“Roughly the equivalent of the entire population of Ireland has illegally entered the United States in the 18 months President Biden has been in office, with many being released into American communities,” FAIR President Dan Stein said in the statement.

He criticized Biden for blaming the unprecedented surge in illegal immigration on external factors, without addressing the outcry from critics who blame the surge on the administration’s “sabotage” of U.S. immigration laws. After rolling back key Trump-era policies designed to deter illegal entry through the southern border, Biden has presided over the largest number of apprehensions of illegal immigrants at the U.S.–Mexico border in a calendar year in history, recording almost 1.9 million arrests last year.

“The endless flow of illegal aliens and the incursion of lethal narcotics pouring across our border will not end until this administration demonstrates a willingness to enforce our laws,” Stein said.

Two million illegal aliens have entered the country in the first 10 months of this fiscal year, according to data from U.S. Customs and Border Protection (CBP). In June, more than 207,000 illegal immigrants were apprehended attempting to cross the U.S.–Mexico border, making this the highest number of June apprehensions in history.

Although July saw a slim decline in CBP encounters at the southwest border of nearly 200,000, it turned out to be the 17th straight month with more than 150,000 encounters, representing a 325 percent increase over the average number of July apprehensions under the Trump administration, the statement reads.

Among the more than 213,000 illegal aliens deported from the border in July, only 37 percent of the arrests led to expulsions under Title 42—a 7 percent drop from last month. Border agents processed the majority of the rest under Title 8, which oftentimes lets illegal aliens be released into the U.S. interior while their cases sit in backlogged immigration courts.

The Biden administration announced it would end the Trump-era Title 42, a border policy put in place on public health grounds amid the COVID-19 pandemic, which it had been forced to keep in place owing to a lack of notice.

CBP also reported 10 individuals on the FBI’s terror watchlist were apprehended in July between ports of entry at the southwest border, pushing the total for the current fiscal year to 66.

Meanwhile, CPB seized 2,130 pounds of the synthetic opioid fentanyl last month, more than three times than was intercepted in June, and topping the previous monthly record of nearly 1,300 pounds set in April.

It nearly equals the total amount of fentanyl confiscated throughout 2019.