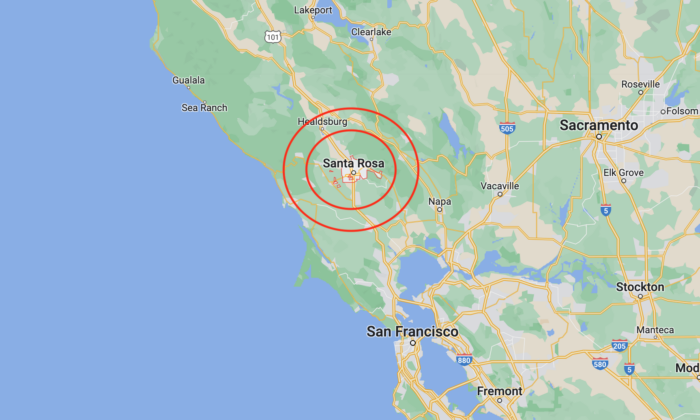 A 4.4-magnitude earthquake followed by a 3.9 aftershock was reported on Tuesday evening near Santa Rosa in Northern California, according to the U.S. Geological Survey (USGS).

USGS said the quake struck at around 6.39 p.m. three miles north-northeast of Santa Rosa at a depth of 3.48 miles (5.6 kilometers).

The quake caused some damage, with Santa Rosa Fire Department responding to calls for assistance with people stuck in elevators and reporting gas leaks.

“Earthquake Update: Santa Rosa Fire has responding to multiple reports of odors of gas, gas leaks, fire alarms as well as stuck elevators. No reports of any injuries related to the quake at this time,” Santa Rosa fire department said on Twitter.

Southern Californian Seismologist Lucy Jones, Ph.D., said there was a five percent chance the quake would be followed by a larger quake in the next three days.

“But most are only a little bit larger. When it is right on a big fault, capable of a big quake, the chance that that following earthquake will be big is a little higher, but still small,” she wrote on Twitter.

A magnitude 4.4 quake would be the strongest in three years in the Bay Area, according to meteorologist Drew Tuma, who took to Twitter after feeling it.

“Would expect a lot of people in the North Bay to have felt a strong jolt,” he wrote on Twitter.

USGS indicated the quake occurred along the Rogers Creek fault, which is a potentially right-lateral strike-slip fault. The last time a moderate-sized quake, which is between 5.6 and 5.7 on the Richter scale, happened on this fault near Santa Rosa in October 1969.