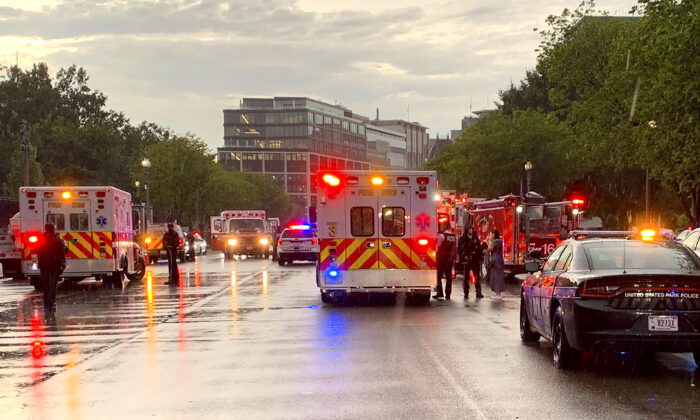 Emergency medical crews are staged on Pennsylvania Avenue between the White House and Lafayette Park in Washington on the evening of Aug. 4, 2022. (D.C. Fire and EMS/Twitter via AP)
District of Columbia

Another victim died Friday after being struck by a bolt of lightning near the White House in Washington, bringing the total death toll to three by the end of the week.

The Metropolitan Police Department said on Aug. 5 that an unnamed 29-year-old man injured in the Thursday night strike had also died, while the fourth person, a woman unidentified, was still in critical condition with life-threatening injuries.

It came after a husband and wife from Wisconsin celebrating their 56th wedding anniversary had been killed in the incident. The couple, both in their 70s, are survived by five children, 10 grandchildren, and four great-grandchildren, a relative told the Wisconsin State Journal.

“They were a very loving couple,” said their niece Michelle McNett of Janesville. “They were very, very family oriented. I think everyone’s just in shock right now and kind of request[s] privacy.”

All the four victims were near a tree in Lafayette Square outside the White House complex when they were hit in the storm at around 6:30 p.m., according to Vito Maggiolo, a spokesperson for the D.C. Fire and EMS department. The incident closed part of the park with emergency services at the scene.

Authorities did not reveal how the people were injured.

Death by lightning strikes seldom occurs from severe burns but from a massive electrical pulse that typically carries 30,000 amps of direct current—millions of times the amount of internal current a person can withstand—and stops the heart from beating.

Although about 40 million lightning strikes hit the ground nationwide each year, official data show that the strike chance is less than one in a million, and 90 percent of victims survive. Yet injuries can result in permanent disability to survivors, such as hearing loss, weakness in the arms and legs, or damage to the nervous system.

A similar incident happened in June 2020 when two members of the National Guard were struck by lightning in the park, where they were stationed amid demonstrations over the death of George Floyd. They sustained non-life-threatening injuries.

On June 13, 1998, a crowd of 66,000 gathered at Robert F. Kennedy Memorial Stadium in Washington for a concert when a lightning bolt struck 11 people, four of whom were rushed to D.C. General Hospital, including one in critical condition.

From 1989 to 2018, lightning strikes killed an average of 43 Americans a year, according to the National Weather Service.