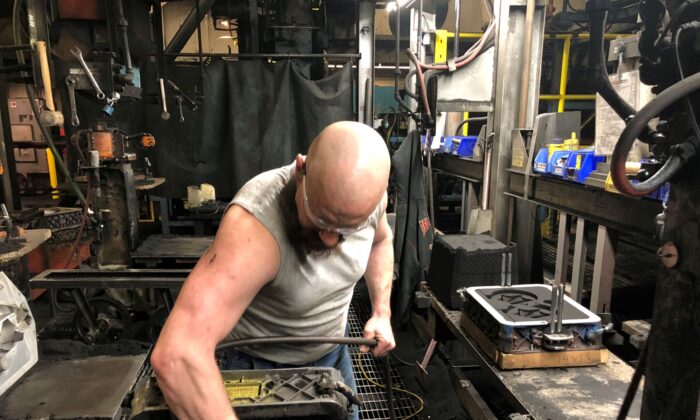 America’s economy expanded at an annualized pace of 2.3 percent in the third quarter, up 0.2 percent from earlier preliminary estimates and beating economists’ expectations, according to revised data from the Commerce Department.

The updated economic growth figures, released Dec. 22, show that the U.S. economy grew faster in the third quarter than the Commerce Department’s prior “advance” projection of 2.1 percent, largely on the back of an upward revision to personal spending and private inventory investment.

Consensus forecasts expected the agency’s third and final revision to show that the economy grew at a 2.1 percent pace.

The final third-quarter GDP number was sharply lower than the 6.7 percent pace of growth in the second quarter, with the Commerce Department blaming the Q3 deceleration on a slowdown in consumer spending as a resurgence of COVID-19 cases sparked new restrictions and business reopening delays.

Economists are generally predicting a solid rebound in the final quarter of the year, as long as high inflation and a rise in COVID-19 cases don’t dampen economic activity.

“In less than a month’s time, the swift and dramatic emergence of the Omicron variant has created a higher level of risk and uncertainty for the economic recovery,” Bankrate senior economic analyst Mark Hamrick told The Epoch Times in an emailed statement.

“The true extent of any possible downside impacts on consumer and business activity is difficult to know at this point. But it is unlikely that there has been a surge in fresh job loss,” Hamrick said, referring in his prediction to the forthcoming Dec. 23 data release on weekly jobless claims, a proxy for layoffs.

Last week’s jobless claims filings came in at their lowest level in decades, suggesting that businesses were reluctant to let go of workers amid the “Great Resignation” hiring crunch.

RSM chief economist Joseph Brusuelas wrote on Twitter: “I’m forecasting a 7.2 percent in the Q4’21. That implies the US economy would expand a greater than 5 percent pace in 2021 which would be the strongest growth rate since the mid 1980’s despite risks to the outlook from omicron & inflation.”

The Commerce Department’s updated GDP release also included an upward revision to the so-called core Personal Consumption Expenditure (PCE) inflation rate, which excludes the volatile categories of food and energy. The updated figures show the core PCE price index rose 4.6 percent in the third quarter compared to the 4.5 percent projection in the earlier estimate. The headline PCE price index remained unchanged in the revision at a 5.3 percent pace.

Surging inflation, which has emerged as a key concern among U.S. consumers, has prompted the Federal Reserve to accelerate the pace of scaling back stimulus.

Economists generally expect the U.S. economy to grow by around 5.5 percent for the whole year, which would be the best showing since 1984 and a sharp improvement from 2020, when the economy contracted by 3.4 percent.