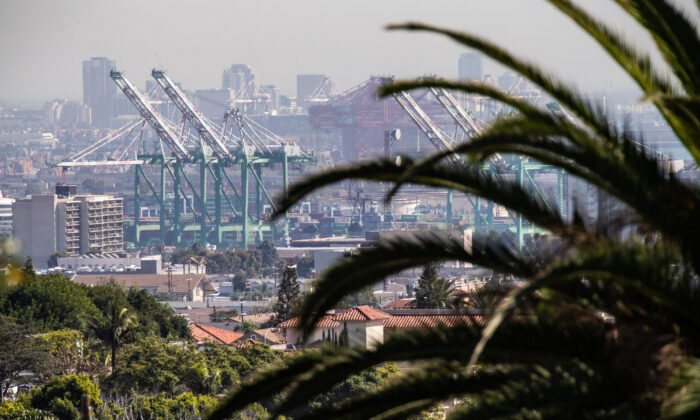 Shipping containers wait to be transferred from the ports of Los Angeles and Long Beach on Oct. 14, 2021. (John Fredricks/The Epoch Times)
Economy

America’s economy expanded at an annualized pace of 2.1 percent in the third quarter, updated Commerce Department figures showed on Nov. 24, and while that’s faster than the earlier “advance” estimate of 2.0 percent, it missed analyst forecasts for a 2.2 percent pace of growth.

While Wednesday’s print came in below expectations and sharply lower than the 6.7 percent pace of growth in the second quarter, economists are generally predicting a solid rebound in the final quarter of the year, as long as rising inflation and a recent uptick in COVID-19 cases don’t dampen economic activity.

A separate Census Bureau report (pdf) released earlier in the day showed that U.S. exports jumped by 10.7 percent month-over-month in October, prompting analysts at Capital Economics to post an upward revision to their fourth-quarter GDP forecast.

“The bigger news this morning was the huge 10.7 percent m/m surge in exports in October, which is why we now estimate that GDP growth will accelerate from 2.1 percent annualized in the third quarter to more than 5 percent in the fourth, well above our previous forecast of a rise to 4 percent,” Michael Pearce, senior U.S. economist at Capital Economics, wrote in a note.

Inflation picked up its already red hot pace in October, with the Commerce Department reporting on Nov. 24 that the headline Personal Consumption Expenditures (PCE) index surged 5.0 percent over the year, vaulting to a level not seen since 1990 and reinforcing broader concerns about the persistence of inflationary pressures.

The core PCE inflation index, which excludes the volatile categories of food and energy and is the Federal Reserve’s preferred inflation gauge for calibrating monetary policy, rose in the year through October at 4.1 percent, the fastest pace since 1991.

Economists generally expect the U.S. economy to grow by around 5.5 percent for the whole year, which would be the best showing since 1984 and a sharp improvement from last year, when the economy contracted by 3.4 percent.

“Growth will likely be above par for the foreseeable future, but within the context of historically high inflation which should relax its grip on the economy to some degree in the year ahead. The prices of many commodities are falling, and there are hopeful signs on the supply chain front,” he added.