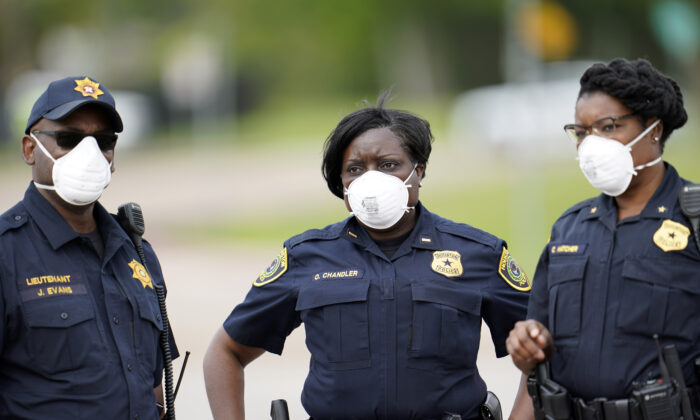 Manufacturing giant 3M, which produces medical equipment, warned Friday that the White House’s request for the firm to stop exporting respirator masks could make the gear less available in the United States.

The Minnesota-based company—the maker of Scotch tape, Post-It Notes, as well as protective masks—issued a statement about a day after President Donald Trump invoked the Defense Production Act to force 3M to produce more respirator masks for healthcare workers during the battle against the Chinese Communist Party (CCP) virus, commonly known as novel coronavirus.

Under the act, Trump requested 3M to stop exporting respirators to Canada and Latin America, according to the firm.

The company said the move would present “significant humanitarian implications” in Canada and Latin America because 3M is a crucial supplier to those countries. Other countries will likely do the same thing, which could impact supply chains, it argued.

“If that were to occur, the net number of respirators being made available to the United States would actually decrease,” 3M wrote in a statement Friday. “That is the opposite of what we and the administration, on behalf of the American people, both seek.”

“We also continue to act on reports of price gouging and unauthorized reselling related to 3M respirators. This activity is unethical and illegal. We are working with the U.S. Attorney General and attorneys general of every state, making it clear that 3M has not and will not raise prices for respirators and offering our assistance in the fight,” according to the 3M statement.

On Thursday, Trump invoked the Defense Production Act to obtain more N95 respirators “after seeing what they were doing with their masks,” according to his post on Twitter, without elaborating. Healthcare professionals around the United States have struggled to try and obtain the masks in recent days as demand has skyrocketed.

“Big surprise to many in government as to what they were doing—will have a big price to pay!” he wrote.

Trump’s executive order directing 3M to produce more masks authorizes the head of the Federal Emergency Management Agency (FEMA) to obtain any number of N95 masks, according to the text of the order.

Earlier this week, 3M announced it has boosted production of N95 masks to 100 million for the month, which would include 35 million masks per month in the United States.

Trump and Dr. Anthony Fauci, the director of the National Institute of Allergy and Infectious Diseases, are reportedly going to soon recommend the general public to wear face masks in public.

Officials in the town of Laredo, Texas said that starting on Thursday, people have to wear a mask or some form of coverage in public or they will receive a $1,000 fine.