School of One Brings New Form Style of Teaching
0 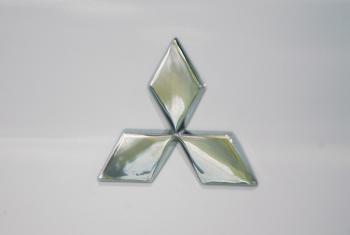 The logo for Japanese auto maker Mitsubishi Motors can be seen on the rear of a model displayed at the South Florida International Auto Show in Miami Beach, Florida in 2006. (Roberto Schmidt/AFP/Getty Images)
Business

By Mimi Li
Print
Mitsubishi’s electronics division in the US has announced that it will make a 92-inch 3D TV this year. That’s right: 92 inches of 3D television shows and movies right in your home.

The 3D Home Cinema HDTV (model WD-92840) won’t be an LCD or plasma TV, but will use rear-projecting DLP technology, similar to 3D films shown at movie theaters.

The 3D TV will be nearly eight feet long diagonally from corner to corner. “Size does matter,” Frank DeMartin, vice president of marketing at Mitsubishi Digital Electronics America, said in a statement.

The Japanese conglomerate is banking on the 3D TV becoming the next big trend while playing to consumers’ traditional fondness of big screens.

“3D TV has formally arrived, and unit sales in 2010 certainly underscore this fact. 3D dominated box office numbers, as consumers flocked to the cinema to lose themselves in the fully immersive experience that large screen 3D delivers,” Max Wasinger, executive vice president of sales and marketing at Mitsubishi Digital Electronics America, said in a statement.

“Our focus at Mitsubishi is to replicate the cinematic 3D experience in the home, and our broad offering of very large screen 3D Home Cinema and 3D LaserVue TVs do just that.”

Mitsubishi is slated to show off the mammoth 3D TV at Consumer Electronics Show (CES) 2011, which runs Jan. 6 to 9 in Las Vegas, Nev.