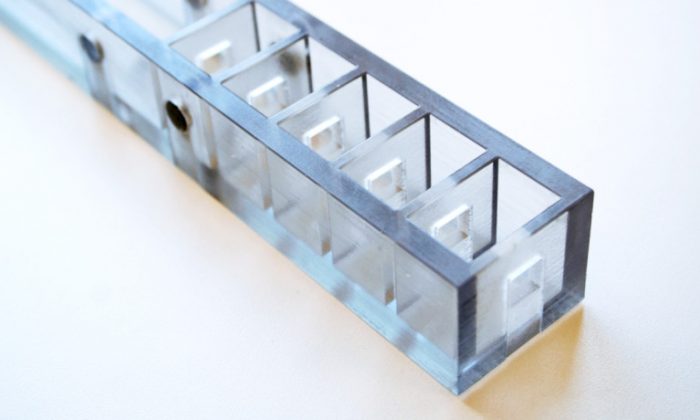 Above, the 3D-printed polymer structure with the five resonance chambers. Microphones for measurements are introduced into the side holes visible on the left. The structure is around 2.5 centimeters wide and high. (Photo: Miguel Molerón/ETH Zurich)
Science

Scientists have developed a new method to differentiate very weak and short sound waves from longer ones. When used in acoustic imaging, the technology makes it possible to detect only the outline of objects.

Reverberated sound can make objects visible. The shipping industry uses sonar to acquire information about the seabed or shoals of fish, and gynecologists use ultrasound images to study fetuses in the womb. Material testing procedures that regularly check for fissures in rail tracks or aircraft support structures also rely on ultrasound.

To understand just how the new acoustic edge detector works, it is important to know that sound waves are reflected off edges in a remarkable way: The acoustics near the edges is dominated by so-called evanescent waves. These waves have a much shorter wavelength than the incident sound waves that produce them. As the evanescent waves decay very fast as they propagate, they can only be measured in close proximity to the edge.

Methods to recover information contained in these waves have been developed in the past; however, the new method intensifies the evanescent waves and differentiates them from larger sound waves that are reflected in the “normal” way.

“This type of measuring method delivers similar results to the edge detection filter in an image-processing software, which allows the outline of prominent photo objects to be identified with the click of the mouse,” explains Chiara Daraio, professor of mechanics and materials at ETH Zurich.

A new polymer structure, developed and produced with 3D-printing by postdoc Miguel Molerón, is central to the new method.

The structure is a pipe with a square cross-section, the inside of which is divided into five adjoining resonance chambers connected via small windows. “The resonance achieved by this structure intensifies the evanescent waves, and the successive chambers filter out the longer waves,” explains Molerón. At the head of the structure, four microphones measure the transmitted sound.

To create an outline image, the scientists bounced sound with a specific frequency off the object through a loudspeaker. They attached the polymer structure with the microphones to a robot very close to the object’s surface, which enabled them to systematically scan the entire surface and generate the outline image from the measured sound data.

According to the scientists, the new measuring method is most useful when the aim is to record relevant information about the object as quickly as possible rather than obtaining a perfect image. “We have created an acoustic imaging method with which any unnecessary information isn’t recorded,” says Daraio.

“Outlines and edges are sufficient to classify objects based on their shape and size, for example, or to identify fissures or defects on the surface of materials,” adds Molerón.

No Need to Cook, Now You Can 3D-Print Your Food

The work is currently just a proof of concept. The method still needs to be refined before it can be applied in practice. The scientists used sound at an audible frequency in their study. However, it would also be interesting to adapt the method for ultrasound that has shorter wavelengths.

“Because the size of the polymer structure has to be adjusted to the operational wavelength, we need to miniaturize the structure. We now want to find out how far we can go with it,” says Molerón. He is aiming to improve the acoustic imaging method for potential use in biological research or medicine.

The findings appear in Nature Communications.