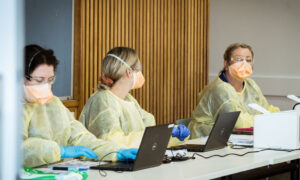 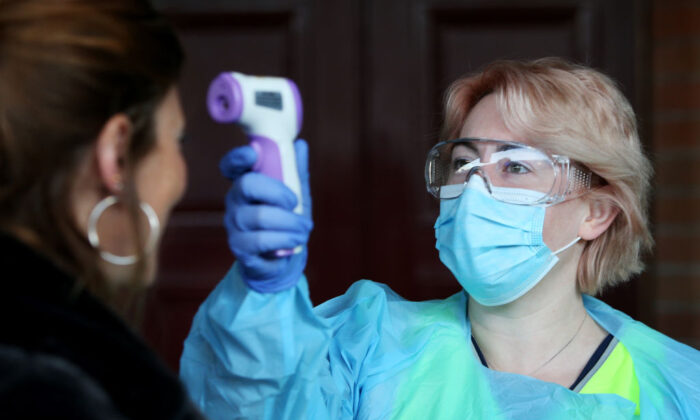 A nurse takes the temperature of an arriving rail passenger from Melbourne at Central Station on July 3, 2020 in Sydney, Australia. (Lisa Maree Williams/Getty Images)
Australia

39 Days Without a Local COVID-19 Case in Victoria

Victoria has gone 39 days without a new local coronavirus case despite the start of international arrivals in Melbourne.

The state reported no locally acquired or overseas cases and no deaths with 7043 test results received in the previous 24 hours, the Department of Health of Human Services said on December 8.

There are also no possible cases under review, the department says.

Another five flights from Singapore (two), Doha, Abu Dhabi and Dubai are scheduled to arrive at Melbourne Airport on Tuesday.

There is a weekly cap of 1120 passengers, who will have to pay for their mandatory 14-day stay in hotel quarantine.

The fee will be set at $3000 per adult, $1000 for each additional adult in a room and $500 for children aged between three and 18, which is the same as what is charged in NSW and South Australia.

The government will introduce legislation to parliament on Tuesday to impose the fee on travellers and has received legal advice they will be able to charge retrospectively.

Most passengers on Monday were taken straight from the tarmac to the Pan Pacific and Park Royal hotels, while those who have COVID-19 symptoms or complex medical needs were instead moved to “hot hotel” Novotel at South Wharf.

Victoria has not accepted international flights since the end of June, when it was revealed a number of hotel quarantine workers had contracted COVID-19 from guests.

The outbreaks sparked the state’s deadly second wave and led to the nation’s toughest lockdown.

Victoria Police is now in charge of all aspects of security within the hotels and being assisted by about 170 Australian Defence Force personnel.

It comes after two travellers flying from Tokyo failed to enter mandatory quarantine in Sydney and boarded Virgin flight VA838, which landed in Melbourne at 1.25pm on Saturday.

The pair – a 53-year-old woman and 15-year-old boy who are German-Australian dual citizens – tested negative to COVID-19. They were retested on Monday and again returned a negative result.

More than 170 passengers and crew, as well as a handful of airport staff, who were forced to self-isolate can now leave quarantine.