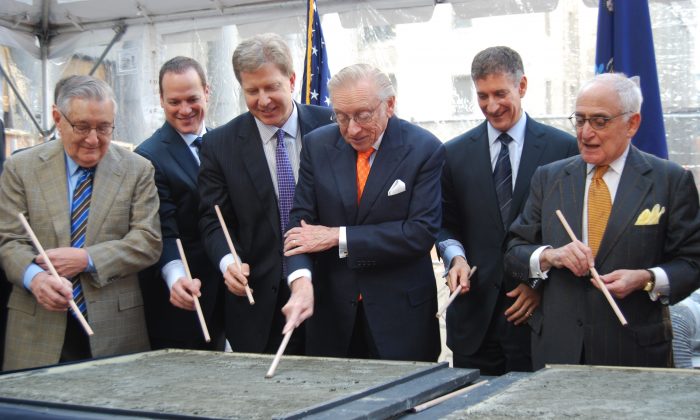 NEW YORK—Larry Silverstein has been a transformative developer in Downtown Manhattan with the World Trade Center commercial towers. He is now adding a luxury hotel to the skyline.

The groundbreaking of 30 Park Place, which is slated to be a Four Seasons-run hotel and private residence tower, took place Dec. 3 as below-grade construction completed.

Silverstein Properties bought Moody’s headquarters at 99 Church in 2006 and demolished the building a year after. Two years of design followed, and then the financial crisis hit. Now the building is fully financed and under construction.

“I’ve been staring at this site for four years through my office window at 7 World Trade Center and it’s so great to see a big yellow crane and action on the site,” Marty Burger, co-CEO of Silverstein Properties, said at the groundbreaking.

At 926 feet, 30 Park Place will be the tallest residential tower downtown. The project includes a public plaza. A hotel will occupy 38 of the 82 floors in the building. The rest of the units will be luxury condos.

This location makes for the third Four Seasons hotel in the city. But unlike the other acquired hotels, this is the first one designed with the level of service the brand has in mind, said Craig Reid, president of hotel operations for Four Seasons in the Americas.

“When this opens, this will be the best hotel in the country,” Reid said. The Four Seasons team has been involved in the design of the building since 2008, he added, poring over floor plans and details.

“We want to bring in a level of service and a level of residential experience that hasn’t been seen in New York,” Reid said.

Architect Robert A. M. Stern, who will be designing the building and private residence interiors, says the limestone tower will counterpoint Silverstein’s glass and steel office building just a few blocks away.

“30 Park Place will significantly further the transformation of Downtown into a vibrant mixed-use neighborhood for New Yorkers and tourists alike,” Stern said.

Silverstein envisions the Financial District as the right destination for everything, 24/7.

Silverstein said he’s always been drawn to Lower Manhattan and saw tremendous potential. His company started purchasing real estate downtown in the 1970s, and built their first office building at 200 million square feet near the World Trade Center towers in 1987.

In 2001, Silverstein bought the towers, and has dedicated the last 12 years to rebuilding the area.

Silverstein Properties has owned and managed over 35 million square feet of real estate in the United States and has over $10 billion in development underway right now.