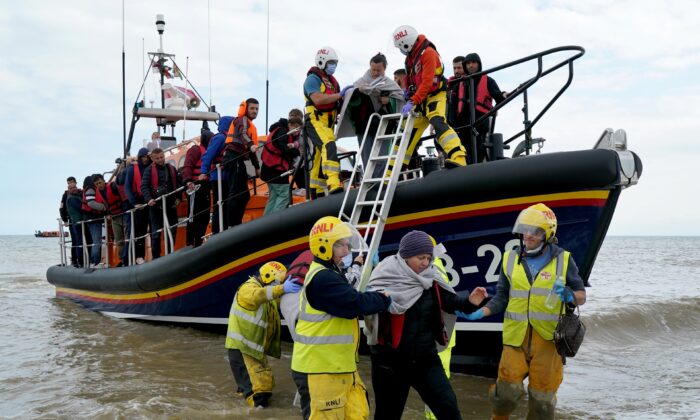 A group of illegal immigrants are brought to port after being rescued by the RNLI, at Dungeness, Kent, England, on Sept. 15, 2022. (Gareth Fuller/PA Media)
UK

Thirty-eight illegal immigrants have been rescued from the English Channel after their boat sank off the coast of southeast England, the UK’s Ministry of Defence (MoD) said on Sept. 15.

The illegal immigrants were trying to reach the UK coast in a dinghy, which deflated in UK waters at around 6:17 a.m. local time. The Coastguard began a search and rescue operation alongside the Royal National Lifeboat Institution (RNLI), Royal Navy, Border Force, and police.

By around 7:07 a.m., all 38 illegal immigrants had been rescued. They were all checked, found to be in a safe and stable condition, and were taken to Dover for processing, the MoD said.

That wasn’t the only small boat carrying illegal immigrants to the UK on Sept. 15. Large groups of people were later pictured being brought to Dungeness on two lifeboats.

A record 1,295 illegal immigrants made the trip on Aug. 22, the highest figure for a single day since the current system of record-keeping began in 2018.

The crossings can be deadly. On Nov. 4, 2021, 27 illegal immigrants, including 17 men, seven women, and three children, died when their boat sank in the Channel.

Last month, UK officials said it’s remarkable there haven’t been any serious incidents, such as drownings, this year as the average number of people per boat has risen to 44, from 28 in 2021.

Almost all of the dinghies and rigid inflatable boats have been intercepted by the navy, the RNLI, or other UK law enforcement vessels, which then take the migrants ashore and hand them over to the immigration authorities. That approach has been widely criticised.

At a meeting of the Defence Select Committee in the House of Commons on July 12, Labour MP John Spellar said the Royal Navy isn’t stopping illegal immigrants from entering the UK but simply escorting them into Kent ports.

Armed forces minister James Heappey rejected the assertion, insisting that he believed the Royal Navy had “gained control” of the English Channel.

Last month, two reports criticised the Home Office over its “ineffective” response to the challenge of illegal immigration in the Channel. One said the Border Force’s approach to preventing the journeys was “ineffective and possibly counter-productive,” while the other said the initial processing of those who arrived has been “ineffective and inefficient.”