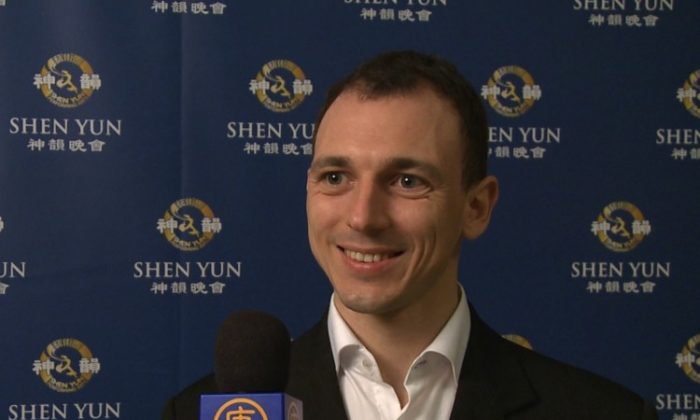 PRAGUE—”It was amazing! I did not expect it would be so great an experience,” said Michael Cerovsky after seeing Shen Yun Performing Arts at the Prague Congress Center on April 4.

Even though he had heard great things from the show’s organizers beforehand, Mr. Cerovsky said that he still didn’t know exactly what to expect. Now that he’s seen it, he said he has already made plans to see the show again as quickly as possible.

“But still, I could not imagine how great experience it would be, and I immediately called my mom and grandmother after the performance to reserve time for tomorrow, so that I will buy them the tickets for tomorrow.”

“I was really surprised, and I liked it very much,” he added.

“For 5,000 years divine culture flourished in the land of China. Humanity’s treasure was nearly lost, but through breathtaking music and dance, Shen Yun is bringing back this glorious culture,” reads Shen Yun’s website.

“My grandma is a longtime worker at the Theatre Institute, so I said that the theatrical decor and the costumes—it’s just for her, and that she would like it,” Mr. Cerovsky explained.

“At the same time as the experts of classical music, so too was the orchestra—and the singers were really amazing,” he said.

He concluded that entire show was nothing short of the best. “So it was a perfect concert,” he said. “The colors and the peace—it was just incredible.”

With reporting by Michael Fitzgerald