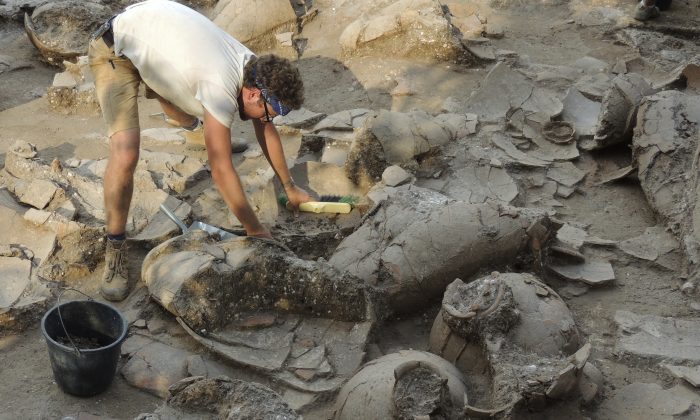 The ancient jars show evidence of sophisticated wines—red and possibly white wine. Traces of tartaric and syringic acid, key components of wine, were found using a chemical technique called organic residue analysis. These wines were also found to have been blended with other ingredients such as honey, mint, cedar, cinnamon, juniper berries, and tree resin, which was a common preservative. The wine recipe was similar to wines used later by Egyptians, and then across the Mediterranean.

Evidence suggests that the wine was not consumed by the local population, but reserved for royalty, important guests, and palace banquets in ancient Canaan.

Proportions of each compound were analyzed and remarkable consistency was discovered between jars.

This represents the “consistency and control you’d expect in a palace” says Curtis Runnels, an archaeologist at Boston University, according to AP.
This is the oldest palace wine cellar ever discovered according to Brandeis University news. The wine cellar would have been capable of holding about 530 gallons of wine.

“The wine cellar was located near a hall where banquets took place, a place where the Kabri elite and possibly foreign guests consumed goat meat and wine,” said Assaf Yasur-Landau co-director of the excavation from the University of Haifa, according to Brandeis University Press.

Two doors were discovered leading out of the wine cellar, probably to additional storage rooms. The nature and contents of these other two rooms will not be known until 2015.

This discovery sheds new light on the development of winemaking in ancient Canaan. Before this discovery the sophistication of wines was a fact suggested only in ancient texts.