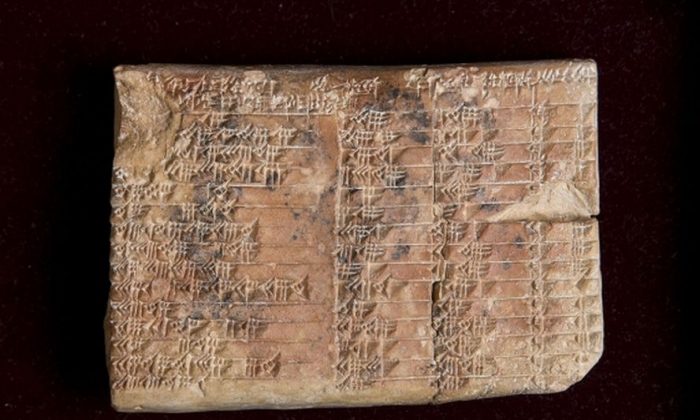 A 3,700-year-old Babylonian tablet was recently translated and might rewrite the history of math, suggesting that trigonometry may have been developed before the ancient Greeks.

The researchers said the tablet proves that the Babylonians developed trigonometry some 1,500 years prior to the Greeks.

The tablet, called Plimpton 322, was found in Southern Iraq around the turn of the last century. American archaeologist and diplomat Edgar Banks, the inspiration for Indiana Jones discovered the tablet.

As the Telegraph noted:

However unlike today’s trigonometry, Babylonian mathematics used a base 60, or sexagesimal system, rather than the 10, which is used today. Because 60 is far easier to divide by three, experts studying the tablet, found that the calculations are far more accurate.

“Our research reveals that Plimpton 322 describes the shapes of right-angle triangles using a novel kind of trigonometry based on ratios, not angles and circles,” Dr. Daniel Mansfield of the School of Mathematics and Statistics at the University of New South Wales Faculty of Science, said in a university news release. “It is a fascinating mathematical work that demonstrates undoubted genius. The tablet not only contains the world’s oldest trigonometric table; it is also the only completely accurate trigonometric table, because of the very different Babylonian approach to arithmetic and geometry.”

He added that what the tablets contained was a “huge mystery until now.”

“Plimpton 322 was a powerful tool that could have been used for surveying fields or making architectural calculations to build palaces, temples, or step pyramids,” he said.

The Greek astronomer Hipparchus, who lived around 120 B.C., has been regarded as the father of trigonometry.

“Plimpton 322 predates Hipparchus by more than 1,000 years,” said UNSW associate professor Norman Wildberger. “It opens up new possibilities not just for modern mathematics research, but also for mathematics education. With Plimpton 322 we see a simpler, more accurate trigonometry that has clear advantages over our own.”

Their findings were published in Historia Mathematica.