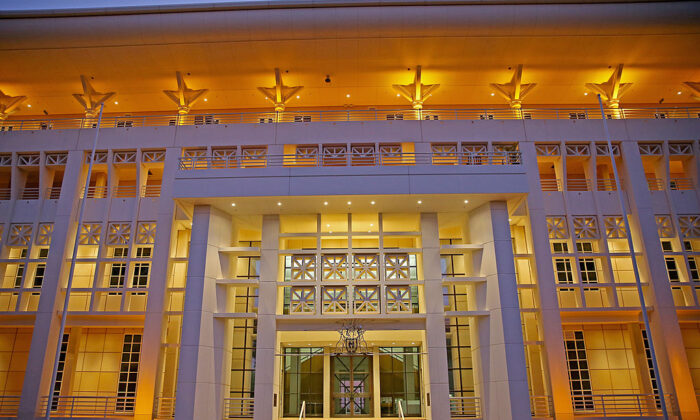 Parliament House is lit up at dusk in State Square on October 6, 2013 in Darwin, Australia. (Photo by Scott Barbour/Getty Images)
Australia

This came on the back of the Chief Health Officer’s (CHO) health direction No.55, which states that the COVID-19 vaccination is now mandatory for any worker or volunteer who has contact with the public at their workplace. It also includes workers who perform “work that is necessary for the operation or maintenance of essential infrastructure or essential logistics in the Territory.”

They will also need to have received their second jab by Christmas Eve.

At a press conference on Oct. 13, Chief Minister Michael Gunner made it clear that the directive would mean the majority of the NT workforce would need to be vaccinated.

“So it is simple. If your job includes interacting with members of the public, then you need to get the jab,” he said.

The NT government has also implemented a $5,000 fine for those who turned up to work unvaccinated.

NT News revealed on Wednesday that of the 364 public servants the government has let go, 137 are Health Department employees and 88 work in the Territory’s education infrastructure. Five police officers also left the force over the mandate.

Northern Territory Public Service (NTPS) Union secretary Erina Early said she expects the public sector to be impacted by the departure of the 364 workers due to the mandate.

“All the NTPS Unions are unsure how our members are going to continue to provide services expected of Territorians with lesser resources and staff,” she said.

However, this exodus of public servants may be a boon for those public servants who have chosen to receive a vaccine after Chief Minister Michael Gunner has proposed putting the extra funds from the staffing losses towards a more significant annual bonus for the remaining public servants.

Gunner said that the standing down of the 364 workers would save the government $30 million, money which could be used to give the remaining 22,000 full-time public servants an extra $10,000 each over four years, the Independent reported.

Specifically, workers would receive a $4,000 bonus in the first year of a new enterprise bargaining agreement (EBA), with $2,000 instalments each year for the following three years.

Gunner said the $4,000 bonus was in recognition of the public sector’s hard work and would keep workers in the Territory.

However, this would come at the cost of a four-year pay freeze.

Gunner’s original proposal for a $1,000 a year bonus coupled with a four-year pay freeze was rejected by the majority of public servants earlier this year.

According to the Independent, the pay freeze would save the government around $424 million over four years, while the new offer, which has upped the bonus from $4,000 to $10,000 per employee over the four-year period, is set to cost around $220 million.

Early said that the use of bonuses was a “very poor and unprofessional industrial relations practice.” She urged the government to abandon that approach, NT News reported.

She added that the offer may be a cash grab and that “It is still a wage freeze regardless of what bonuses they table.”

Gunner has called for public servants to vote on his new proposal before Christmas and stated that the loss of the 364 workers will not impact service delivery.