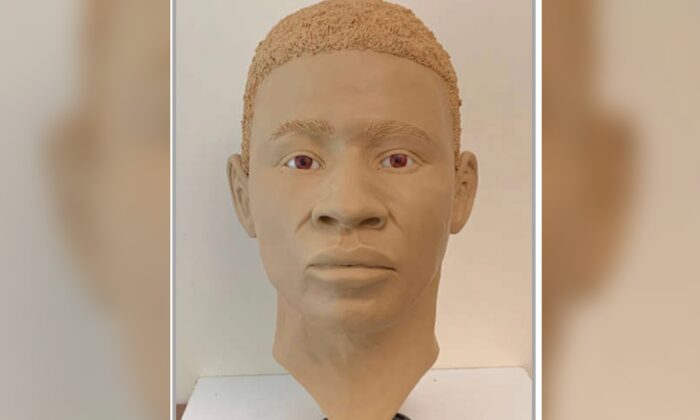 Authorities hope this clay rendering will help reveal the identity of a man who was found dead almost 35 years ago, in a photo released Aug. 25, 2022. (Photo Courtesy of Ohio Attorney General David Yost's Criminal Intelligence Unit)
Crime and Incidents

Almost 35 years after a man’s remains were found, police are still hoping someone can recognize his face, as reconstructed by a forensic artist.

“This face represents a brother, son, or father who needs to reclaim his identity and be given the dignity that he deserves,” Ohio Attorney General Dave Yost said in an Aug. 25 news release announcing that an artist with the state’s Bureau of Criminal Investigation (BCI) had finished a clay facial reconstruction of the unidentified man.

“BCI assists law enforcement and helps families reunite with their loved ones because everybody is somebody to someone,” said Yost, whose investigators have seen recent successes in several decades-old cases.

In this most recent investigative effort, authorities believe that the man had lain undiscovered for three to five years before his remains were found on Sept. 10, 1987, near Mount Hope Cemetery in Youngstown.

Steve Irwin, a spokesman for Yost’s office, said he didn’t have details about how the discovery was made. He also said that the cause of the man’s death was unknown.

The reconstruction was done at the request of the Mahoning County Coroner’s Office, and Youngstown police are also involved in the investigation.

Based on anthropological work, this “John Doe” is believed to be a black male who was 30–44 years old when he died. The artist’s rendering shows him with close-cropped hair and brown eyes, but those features may not be accurate; they were just “artist’s estimations to complete the image, and should not be considered as significant markers for identification,” according to a public bulletin that BCI’s Criminal Intelligence Unit released about the case.

The man’s eye color, hair color, height, weight, and other characteristics are unknown.

Anyone with information is asked to call the Mahoning County Coroner’s Office at 330-740-2175.

Although cracking a decades-old case is a long shot, Yost’s office has seen some successes in recent years, his website says.

In early 2019, shortly after Yost took office, investigators said a relative’s DNA was used to identify a trucker suspected in a string of killings dating to the 1990s.

In June 2019, they announced that a relative’s DNA had been used to identify a 23-year-old Louisiana woman whose slaying had been connected to an Ohio death row inmate.

In March 2020, Yost’s office announced that investigators had identified two women who had remained unidentified for more than two decades after they were found deceased in separate instances in Columbus, Ohio.

A news release at the time said the women were Karen Kaye Frank, 52, whose body was discovered in 1999, and Turina Jefferies, 32, of Philadelphia, Pennsylvania, whose body was found in May 1998.

Even though forensic artists did renderings of both women, it still took several more years of investigative work to confirm their identities through fingerprints and DNA.