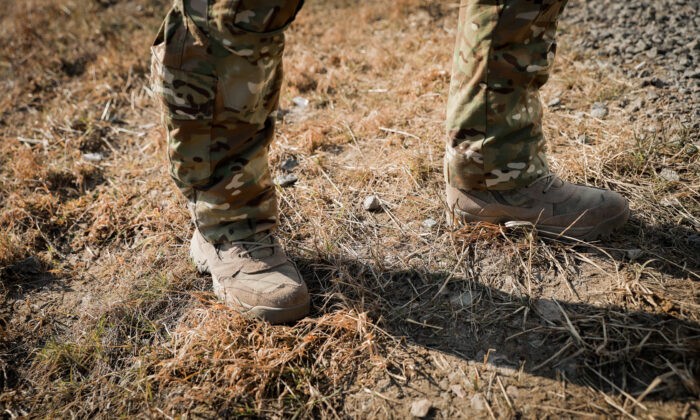 A Polish soldier who had joined as a foreign fighter in Ukraine prepares to return home after his base, Yavoriv International Peacekeeping and Security Centre, was bombed overnight in western Ukraine, on March 13, 2022. (Charlotte Cuthbertson/The Epoch Times)
Russia-Ukraine War

'It was terribly chaotic. There was no command structure. Some people were running around, others were screaming.'
By Ivan Pentchoukov

KOTY, Ukraine—The Russian missiles that slammed into a Ukrainian military facility four miles from the village of Koty, Ukraine, on March 13 lit the morning sky red and sent smoke billowing to the clouds.

As the village church bells rang in alarm, the windows of the farmhouses trembled, barn doors swung open, and terrified locals ran to their basements.

At the training facility, formally known as the Yavoriv International Peacekeeping and Security Centre, soldiers and volunteers ran for cover amid the chaos as missiles battered the barracks, over and over, where some 300 men slept hours earlier.

Thirty-five people died in the attack and 134 were injured, according to Governor of Lviv Regional State Administration Maksym Kozytskyy.

“Shortly after 6 am, the first missiles hit the base. And then chaos. Everybody ran for the woods. It was terribly chaotic. There was no command structure. Some people were running around, others were screaming. It was horrible,” one of the foreign volunteers stationed at the base told The Epoch Times.

By noon, first responders had put out all of the fires at the facility as the flattened ruins of barracks smoldered.

The training base was used to station foreigners who came to fight for Ukraine, according to the man, who asked to remain anonymous.

The soldiers who survived the blasts were told to head into the nearby forest and dig in, the volunteer fighter told The Epoch Times. Later, they were given the choice to return to their home countries or to stay. The man decided to go home, shocked by the reality of war and too terrified to continue.

More than 30 Russian cruise missiles targeted the large facility. Some of the missiles were intercepted, according to Kozytskyy.

Later that day, two Ukrainian soldiers patrolled the area nearby in a car that had been damaged during the airstrike. They told The Epoch Times that men who fled the barracks after the first missile exploded were pummeled by debris. The missiles hit the barracks exclusively, he said, reducing them to piles of rubble and brick.

The International Peacekeeping and Security Centre, which has hosted NATO drills and Western officials, including NATO Military Committee Chair Adm. Rob Bauer, is 15 miles from Ukraine’s border with Poland.

Since the start of the war, the center has become a training ground for foreign volunteers who came to fight for Ukraine, the volunteer told The Epoch Times. Some of the men at the facility were taken there after arriving on Ukraine’s border and declaring they wanted to enlist. They came from Portugal, France, England, Germany, Austria, Poland, the Czech Republic, Hungary, and the United States, the man said.

The volunteer fighter said he didn’t receive much training at the base. He believes Russians determined the facility’s location from photos of the base that were posted to social media by the volunteer soldiers, despite a prohibition on such activity.

“Our own ignorance led to our own demise,” he said.

The women who cooked for those stationed at the facility lived in Koty, as did some of the men who served there, according to a local shop owner, who said she was shocked to be so near the carnage of war.

At the local church that morning, people prayed for peace and clear skies, according to a local resident who lives nearby.

“God should awaken those who wage war,” he said.

Tom Ozimek and Dan Skorbach from NTD Television contributed to this report.