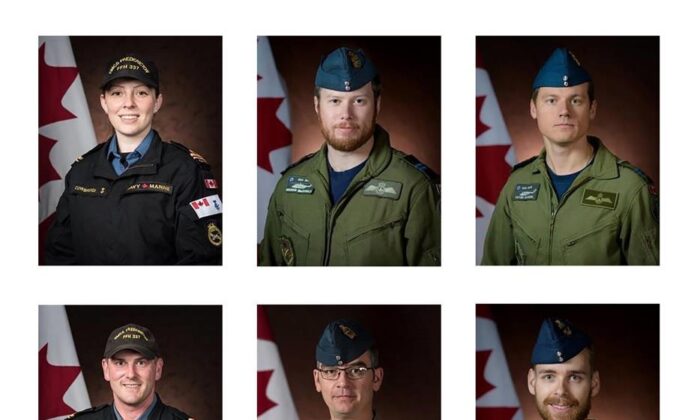 TRENTON, Ont.—A nation already struggling with the emotions of a pandemic lockdown, a horrific plane crash in Iran and the worst mass shooting in its history grieved again on Wednesday as it honoured the victims of Canada’s worst military tragedy in more than a decade.

Canadians from coast to coast to coast watched as the six Armed Forces members killed in last week’s helicopter crash off the coast of Greece were welcomed home in a special ramp ceremony at Canadian Forces Base Trenton in Ontario.

The crash, the cause of which remains under investigation, represents the largest loss of life in one day for the Canadian Armed Forces since six Canadian soldiers were killed in a roadside bombing in Afghanistan on Easter Sunday 2007.

Reminders of COVID-19 were everywhere as the ceremony began, from the sparse crowd outside CFB Trenton to the masks and physical distancing of the victims’ families, military personnel and government leaders on hand.

Among those there in person were Gov.-Gen. Julie Payette and Justin Trudeau, the first Canadian prime minister to attend a ramp ceremony since Paul Martin in January 2004, according to Queen’s University professor Kim Nossal.

The pandemic wasn’t the only difference from previous ramp ceremonies, which started in their modern form during the decade-long war in Afghanistan. There were also the pillows and military headdresses, a reminder that the remains of most of those lost have not been recovered.

Under partially cloudy skies, six hearses were lined up on the tarmac awaiting the arrival of the C-17 Globemaster as the families of the dead and missing Forces members met privately with a mask-wearing Trudeau in a building on the edge of the tarmac.

A short time later, the heavy transport aircraft landed and taxied to the loading area, preparing to discharge its precious cargo to those families and a grieving nation.

The first to emerge was the casket of Sub-Lt. Abbigail Cowbrough, the 23-year-old sailor from Halifax whose remains were recovered shortly after the Cyclone helicopter crashed into the Ionian Sea on April 29 while returning from a NATO training mission.

The casket bearing her remains was slowly carried from the Globemaster’s hulking belly by eight military pallbearers wearing masks to a waiting hearse as a lone bagpiper played a lament. There Cowbrough’s family was given a chance to pay respects and lay roses on her casket.

And then came the first of the pillows for those now missing and presumed dead. This one bore the headdress of Capt. Brendan Ian MacDonald of New Glasgow, N.S., one of the pilots on board the Cyclone helicopter known as Stalker 22.

A lone Air Force member carried the pillow and hat to a hearse as the bagpiper started to play again, the pillow-bearer’s lonely form a striking contrast to the eight pallbearers who moments before carried Cowbrough’s casket across the same stretch of grey tarmac.

As the pillow was placed in the hearse, MacDonald’s family came forward, roses in hand.

After a few minutes, the families climbed into waiting limousines that followed the hearses out of CFB Trenton, past a column of saluting troops before starting the traditional voyage west down the Highway of Heroes toward a forensic’s centre in Toronto.

The federal and Ontario governments had asked because of COVID-19 that people stay home during the traditional procession between CFB Trenton and the Ontario coroner’s office where all military remains repatriated during and since the Afghanistan war have been taken.

Yet many were expected to turn up on overpasses along the route to hang flags and offer a silent tribute as the six hearses and their police escort drove south past Cobourg and Port Hope, Newcastle and Bowmanville before entering Oshawa and the Greater Toronto Area.

In Halifax, Nova Scotia Premier Stephen McNeil noted three of the victims were residents of his province and  “they made us all proud.

“This has been a difficult time in our province and we offer our condolences to their families,” he said. “Let us remind ourselves today to take a moment to mourn their loss and honour their legacy. They served their country, they served this province and we will be forever grateful.”

While the identification of one other set of remains and military services still await, attention is now expected to shift back to the cause of the Cyclone crash.

A flight-investigation team that includes a representative from Sikorsky Aircraft, which builds the Cyclone, is currently investigating the circumstances around the crash. That includes interviewing those aboard the Halifax-class frigate HMCS Fredericton who saw the crash.

The helicopter’s flight-data and cockpit-voice recorders were recovered and are back in Canada for analysis.

The Defence Department says a team that includes social workers and military chaplains has been deployed to Italy to provide mental health support to Fredericton’s crew, who have been allowed to communicate with loved ones back home.

The Cyclone was deployed with the Halifax-based HMCS Fredericton to Europe in January, where they had been attached to a NATO maritime force tasked with patrolling the Mediterranean and Black seas.

Cyclones are primarily based on naval vessels and used for hunting submarines, surveillance and search and rescue. They entered operational service _ replacing the military’s ancient Sea Kings—in 2018 after more than a decade of developmental challenges.