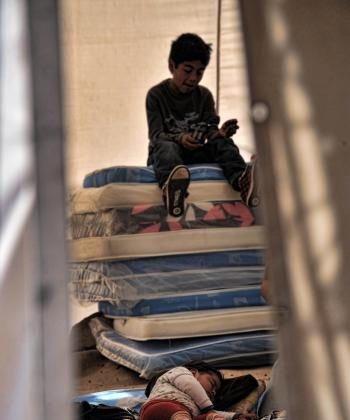 Relatives of trapped miners sleep in a shelter outside the San Esteban gold and copper mine, near the city of Copiapo. (Martin Bernett/Getty Images)
World

Trapped Chile Miners May Wait a Week Before Rescue

The Chilean Mining Minister said it will “probably take a week” to reach the miners who have been trapped since Thursday, according to Chilean newspaper La Tercera.

There has been no contact with the miners since the collapse and it is unknown whether the miners have successfully reached an underground shelter where there is enough water, food, and oxygen to last 72 hours.

The listening equipment should reach the bottom of the mine by Monday morning, said rescue worker Luis Salazar.

The San José mine is located in the Atacama Desert, 500 miles north of Santiago.

Chilean President Sebastián Piñera visited the miners’ families at the mine on Saturday evening.

"I confirmed to them that the government will do everything humanly possible, using all resources and all alternatives to try to save the lives of the 33 miners trapped,” said the president in a statement on the government website.

He added that he will go back to visit the mine as often as necessary.

In 2007, an explosion at the San Jose mine killed three workers.

San Esteban, the company that owns the mine, said that 33 workers were trapped, not 34, as originally thought.