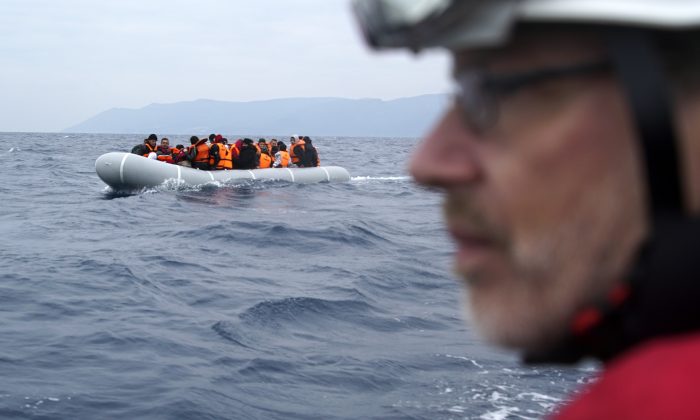 A German rescuer volunteer escorts with his vessel a dinghy with refugees and migrants as they arrive from the Turkish coast to the northeastern Greek island of Lesbos, on Jan. 29, 2016. A migration monitoring agency says deaths of refugees and migrants crossing the Aegean Sea between Turkey and Greece are "increasing at an alarming rate" as 218 people have died in January on that eastern Mediterranean route. (AP Photo/Mstyslav Chernov)
Europe

ANKARA, Turkey—A boat carrying Syrians attempting the short sea journey from Turkey to Greece struck rocks and capsized at dawn on Saturday, causing at least 37 people to drown, among them several babies and young children.

Images of dead children on a beach on Saturday were another soul-searing reminder that Europe’s migrant crisis keeps destroying lives and families by the day.

They recalled the photo of 3-year-old Aylan Kurdi lying face down on a Turkish beach last year. His story put an intimate face on the Syrian refugee crisis for people across the world, prompting many to finally grapple with the magnitude of the suffering caused by the war in the Middle East and the treacherous journeys many risk seeking shelter in Europe.

By contrast, the heartbreaking images Saturday met a muted response, perhaps a sign that many have grown weary of the unending reports about the suffering of migrants even though the number of people dying at sea is rising.

“January has been the deadliest month so far for drownings between Turkey and Greece,” Peter Bouckaert, the emergencies director at Human Rights Watch, told The Associated Press in an email. “Almost every day, more drown on this dangerous journey.”

“It is deeply disturbing that after all those solemn pledges when Aylan Kurdi drowned, these latest drownings were barely mentioned in the media,” added Bouckaert, who played a crucial role in giving wide circulation on Twitter to the images of Kurdi last year. “We have chosen to look away.”

Tima Kurdi , the Kurdi’s aunt, said she is heartbroken to know that children continue to die as her nephew did.

“No parent would put their children in that kind of situation unless what they were escaping from was worse,” she told the AP, speaking from a hair salon she recently opened in Port Coquitlam, British Columbia.

While Turkish authorities gave the boy’s first name as Aylan, his aunt says the family prefers that it be transliterated as Alan.

Saturday’s tragedy occurred when the boat capsized as dozens of people attempted the deceptively short crossing from the Turkish coast to the Greek island of Lesbos barely 5 miles (8 kilometers) away.

More than 250 migrants have drowned already this month trying to reach one of Greece’s offshore islands, entry point to the European Union and its uncertain promise of refuge from war and poverty.

The Turkish coast guard said three ships, a helicopter and team of divers searched the partially submerged craft and surrounding seas for more bodies as police on shore placed bodies, some 10 children among them, in black bags.

Journalists at the scene tried to interview some of the 75 survivors, but police took them away in buses, some bound for a local hospital to be treated for hypothermia and other injuries, others into police custody for questioning.

A Turkish government official said by the late afternoon that rescuers had recovered bodies trapped inside the wreckage of the 17-meter (56-foot) boat, which sank shortly after departing from the shore near the Aegean resort of Ayvacik, raising the death toll to 37. Saim Eskioglu, deputy governor for the coastal Canakkale province that includes Ayvacik, said the boat “hit rocks soon after it left the coast.”

“There were around 10 children among the dead,” Eskioglu said. “Four of them, unfortunately, were babies about one or two years old. We are deeply saddened.”

Eskioglu and Ayvacik’s mayor, Mehmet Unal Sahin, said most of the migrants were Syrians. The Anadolu Agency said the boat also bore natives of Afghanistan and Myanmar.

A private Turkish news agency, Dogan, said police arrested a Turkish man suspected of being the smuggler who organized Saturday’s failed sea crossing. The man denied responsibility, telling the Dogan agency that he also had relatives on board.

Weather conditions did not appear to be a significant factor in the sinking. Journalists at the scene said weather conditions Saturday on the Turkish coast were relatively mild, with light winds and temperatures around 12 degrees Celsius (54 Fahrenheit).

The International Organization for Migration says drowning deaths are running at four times the rate of 2015, when many thousands daily sought to enter the European Union via Turkey by reaching one of more than a dozen offshore Greek islands, chiefly Lesbos.

The agency recorded 805 drowning deaths of migrants on Turkey-Greece sea routes throughout 2015, and a further 218 this month alone excluding the ultimate total of Saturday’s tragedy.

Joel Millman, a spokesman for the International Organization for Migration, said the death toll was “increasing at an alarming rate.” He said it was all the more surprising, given the reality that fewer people are attempting the crossing during winter.

Turkey, which is hosting an estimated 2.5 million refugees from Syria, in November agreed to fight smuggling networks and stem the flow of migrants into Europe. In return, the European Union pledged 3 billion euros ($3.25 billion) to help improve the refugees’ conditions.

The country says it has started rejecting Syrians who arrive without valid visas via third countries. It also has agreed to grant work permits to Syrians as an incentive for them to stay put in Turkey.