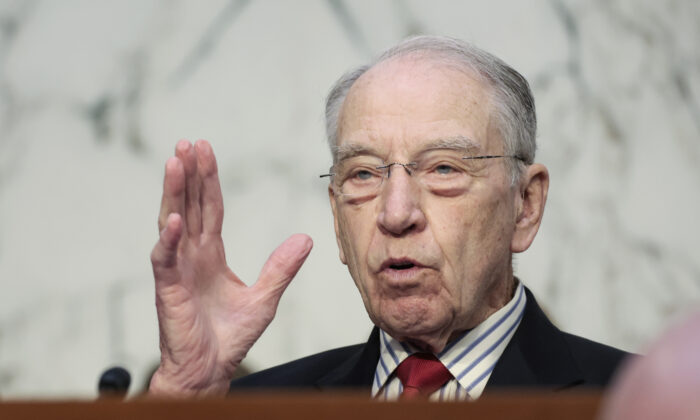 More than 30 Republican senators have requested that Attorney General Merrick Garland give special counsel protections to the federal prosecutor investigating Hunter Biden, arguing that such a move would help assure the American people that the probe is free from political influence amid widespread allegations of bias at the Department of Justice (DOJ).

The president’s son has been investigated by the office of Delaware U.S. Attorney David Weiss, a Trump-appointed prosecutor, since at least 2019.

While prosecutors have not publicly disclosed what is being investigated, documents from the investigation and people who have testified to a grand jury say it includes looking into Hunter Biden’s financial dealings with entities in China and other foreign countries.

“There is no way of knowing the entire scope of the investigation, but evidence seems to be mounting that Hunter Biden committed numerous federal crimes, including, but not limited to, tax fraud, money laundering, and foreign-lobbying violations,” the senators wrote in the Sept. 19 letter to Garland.

It also references whistleblower information received by Grassley’s office detailing a “widespread effort within the FBI to downplay or discredit negative information about” Hunter Biden, including allegations that the FBI “shut down investigative activity and avenues of information relating to potentially criminal information on Hunter Biden before the 2020 presidential election.”

The senators accused Garland of taking the “inexplicable step of chilling lawful whistleblower activity” by issuing an Aug. 30 memo reminding DOJ employees of a policy prohibiting communications with Congressional members without approval. The memo was issued on the heels of whistleblower approaches to members of Congress.

When President Joe Biden took office, the administration allowed Weiss to remain on as prosecutor, even as all other Trump-appointed U.S. attorneys were asked to leave, in a move to avoid the appearance of political interference.

But many Republican lawmakers, including the senators who signed on to the letter, believe this is not enough to ensure the integrity of the investigation

“Given the politicization of the DOJ under your watch and the importance of avoiding any appearance of impropriety, the undersigned request that you provide U.S. Attorney Weiss the full protections and authorities of a special counsel,” the letter stated.

“This is one important action that you can take that will go a long way to restoring faith in our governmental institutions.”

The attorney general in an April hearing assured senators that “there will not be interference of any political or improper kind” in the investigation being run out of Deleware.

Garland, at the time, also declined to comment on repeated questions about a potential special counsel being assigned to the investigation, saying, “The question is an internal DOJ matter,” Garland repeated.

In 2020, the senators also released a report exposing financial dealings between the younger Biden and Chinese nationals connected to the Chinese regime and military.

Hunter Biden has denied any wrongdoing in relation to his business dealings, while the president has maintained that he’s never discussed his son’s business with Hunter.

The Epoch Times reached out to the DOJ and Hunter Biden’s attorney for comment.