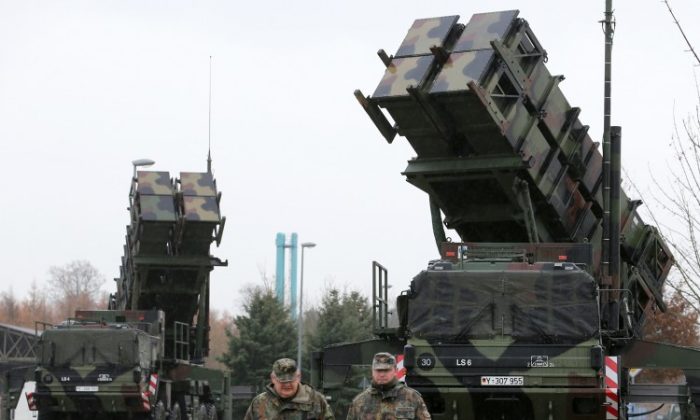 An Iranian army chief issued a warning Saturday that if the United States keeps supporting Turkey during the Syrian conflict, it risks a “world war.”

Maj. Gen. Hassan Firouzabadi made the comment to official Iranian news websites over the weekend after the United States said it would provide Turkey, a fellow NATO ally, with Patriot missiles and soldiers. Germany and the Netherlands also agreed to provide material support.

“The situation is quite disturbing. Each Patriot represents a black spot on the world map and [moves the situation closer to] a world war,” Firouzabadi said, according to the semi-official Mehr News Agency. He delivered the comments to the high commanders of the National Defense University in Iran.

“Unfortunately, every day a European country decides to deploy a Patriot [missile] on Syria-Turkey borders while they are planning for a world war,” brings danger to Europe itself he said.

He added: “An experienced soldier and a strategist can easily know the plan and foresee the painful future. The prudent elites in Europe, the United States, and Turkey [should] soon take action and prevent the conflagration” by removing the Patriot missiles from the region before no one is able drawback the conflict.

In recent months, shells and gunfire from Syria have hit buildings in towns along Turkey’s border. In October, a shell fell on a Turkish family’s home, killing five and prompting the Turkish government to authorize potentially sending troops into Syria to take out targets if such an incident takes place again.

“The wise and the elite in Europe, the United States, and Turkey should dismantle the Patriots and take them away from the region before a fire breaks out,” Firouzabadi elaborated, according to The Associated Press. “We are a friend of Turkey, we want security with Turkey, not Turkey being attacked through Syria so that they would want to deploy Patriots there.”

Firouzabadi claimed that Patriot missiles, which are manufactured by the United States, “are a defense line for the Zionists and a result of (the West’s) concerns over Iran’s missiles and Russia’s presence to defend Syria,” according to AP.

In November, Turkey lodged a request to NATO to provide Patriot missiles as a precautionary measure. Russia and Iran, two of Syria’s closest allies, denounced the move.

In recent days, there have been reports that Syrian Scud missiles were launched at rebels in the northern part of the country, hitting targets close to the Turkish border. The Syrian regime has denied using Scud rockets.