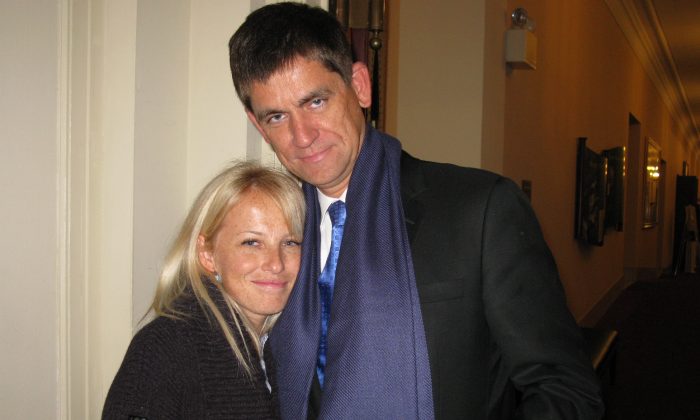 BOSTON—Having a profound interest in music, a couple from Hungary attended Boston Symphony Hall for a performance by the Shen Yun Symphony Orchestra on Oct. 9.

“I think the orchestra and all the people are very professional,” said Peter Lakatos, a partner at an international law firm, who, in his spare time founded the Hungarian Classical Music Foundation in Budapest.

Mr. Lakatos said he and his guest Wynott Ferencz had gone to the show to experience the concert, only to receive a rare performance.

The unique orchestra combines Eastern and Western instruments, melding “the spirit, beauty, and distinctiveness of Chinese music with the precision, power, and grandeur of the Western symphony orchestra,” according to the New York-based orchestra’s website.

Shen Yun Symphony orchestra performed a number of original compositions, such as “Creation,” as well as classics from Beethoven and Tchaikovsky, contemporary work by American composer Leroy Anderson.

“It has really blown us away so far, they are doing a great job,” said Pat Mardula, an engineering student living in Boston who attended Shen Yun Symphony Orchestra with finance student Evan Hershy.

It “exceeded my expectations by so much, its just been unbelievable,” added Hershy, whose cousin is one of the performers.

Mr. Lakatos said his view is that music is universal, and whether people are from America or China, they can play at the highest level.

“I think they’re on a very high level, and this is just evidence that music is universal,” he said.

According to the its website, the orchestra’s “repertoire draws upon five millennia of history, with an array of legends, regions, and peoples from which to find inspiration, reviving themes and melodies from ancient times.”