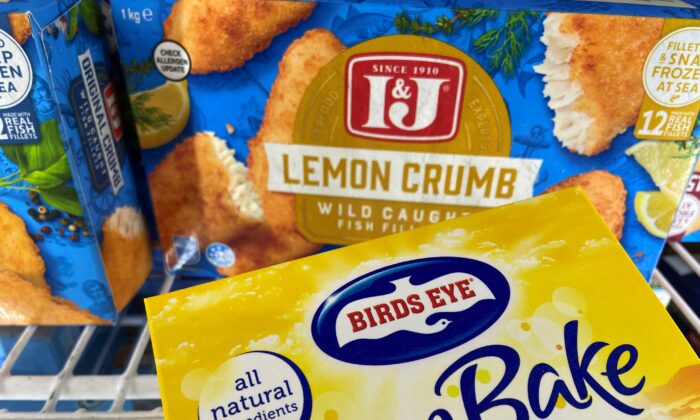 Simplots' popular Birds Eye and I&J products at a supermarket on Nov. 13, 2020 in Sydney, Australia. (The Epoch Times)
Australia

Over 31 frozen fish products will no longer be labelled “Made in Australia” after concerns were raised by the consumer watchdog that the products were not “substantially transformed” in Australia.

Instead popular brands, including Birds Eye, I&J, and Neptune, will be labelled with “Packed in Australia” from Oct. 31 onwards.

The products were found to have imported primary fish ingredients from New Zealand, the United States, and South Africa.

The Australian Competition and Consumer Commission (ACCC) found that only “minor manufacturing processes” occurred locally, which did not justify the application of the “Made in Australia” label.

Simplot Australia misinterpreted the definition of “substantially transformed” and believed that slicing, crumbing, and pan-frying the products locally would suffice. However, after the ACCC raised its concerns, Simplot agreed to change its labelling.

“We are pleased that Simplot co-operated with the ACCC investigation and agreed to make changes to its labelling, and on this basis we decided to resolve this matter administratively without taking enforcement action,” ACCC Deputy Chair Mick Keogh said.

“Not only can incorrect labelling wrongly influence consumers into purchasing a certain product, but it can also give a competitive advantage to those who use the ‘Made in Australia’ label in breach of the Australian Consumer Law,” Keogh said.

Simplot Australia responded to the announcement saying Australia’s topography could not sustain “large-scale white fish biomass” in the surrounding waters of the country, and that it had to procure ingredients from around the world.

“All of this using Australian labour and operated within the high demands of Australian food safety and quality standards,” the statement read.

In Australia, country of origin food labelling is required for most retailed food products.