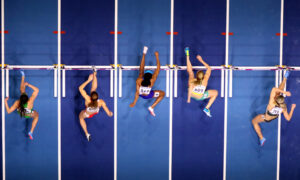 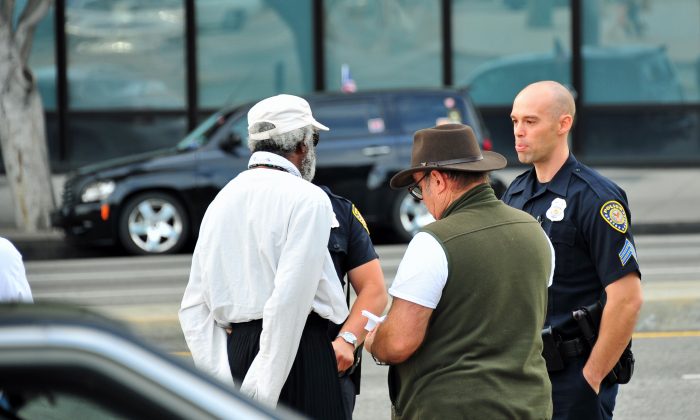 Police demand that placards leaning against the LA Veterans Affairs fence be removed. Veterans were present protesting illegal land use on the VA campus. (Robin Kemker/The Epoch Times)
US

LOS ANGELES—For the celebration of the 300th weekly Veterans Protest against misuse of land at the Los Angeles Veterans Home on Dec. 15, some 25 veterans and family members came to support the protest. Police intervened, asking the protesters to remove some of their materials from the area.

At 3 p.m., in the middle of the protest and speakers, two Veterans Affairs police vehicles stopped on San Vicente Ave. and insisted that Rosebrock remove placards that were along the fence, otherwise they would issue a citation.

“You need to remove the placards that are leaning against the fence,” said the officer, because “they are touching the VA’s property.”

The offending placard that police demanded be taken down from the fence. (Robin Kemker/The Epoch Times)

According to VA regulations, the distributing of materials such as pamphlets, handbills, and/or flyers, and the displaying of placards or posting of materials on bulletin boards or elsewhere on the VA property is prohibited, unless authorized.

“They know we are out here, but it is unbelievable that they would send two police vehicles to interrupt our celebration activities today. It’s truly harassment,” said Rosebrock.

The placards were removed by the participants, thereafter.

The celebration included various speakers who discussed the challenges the Old Veterans Guard had in making the public aware of the misuse of almost one-third of the Los Angeles Veterans Home’s 488 acres that were deed restricted in 1888 for the “exclusive use for veterans’ medical care and supportive housing.”

The celebration brought Veterans from around the state to support the event on the corner of Wilshire and Vicente Boulevard.

Despite the violations of the land deed, however, some veterans groups have been hesitant to join the protests.

“The local LA American Legion has not supported this cause since we started protesting in 2008,” said Rosebrock. “They have never even responded to our letters.”

Rebulio discussed how helpless the homeless veterans are in demanding housing and care from the facility and the resolve he has to support change, “To us, this is an outrage and we are calling for the American Legion’s support in our battle to save the [Veterans] Home,” reading from his letter, “and our disabled and homeless Veterans who have no voice except from the advocates, I am calling for yours and the Legion’s support to help us in the critical issue.”

In 2006, a local homeowners nonprofit group wanted to make the entrance to Brentwood more appealing and raised some $2.5 million for a new ironwork/pillar fence to replace a dilapidated chain-link fence and build a public park on the Veterans Home site.

It apparently was a very difficult effort, because of the exclusive use clause in the deed. Their website originally stated that it required the assistance of Reps. Henry Waxman and Sen. Dianne Feinstein to persuade the VA to allow them to replace the chain-link fence with an ironwork/pillar fence along Vicente Boulevard and build a public park on the VA site. The VA donated $1 million to build the fence.

This seemingly was done to increase cash flow for the VA and thereby be of value to the VA and the veterans. However, several of these tenants never made payments, and the agreements did not have termination penalties typical of such contracts.

These various parties entered into land/building use agreements and none of the uses provided medical care or supportive housing for veterans on the site. These were private enterprises.

Among these private enterprises were a local pet kennel, an athletic facility for a local school, public theaters, a $5 million UCLA baseball field and training facility, and a public park, among other uses. Allegedly one oil company has extracted oil on the site for several decades without paying any royalty to the VA.

Eventually, in 2011, veterans retained the Los Angeles ACLU and went to court in July 2013, suing the defendant, Department of Veterans Affairs Executive Director Donna Beiter of the Greater Los Angeles Healthcare System, and VA Secretary General Eric Shineski. The VA was represented by a Department of Justice legal team at the expense of taxpayers.

Federal Judge S. James Otero of the Central District in California heard the case and concurred with the plaintiff that the VA had violated the mandated use in the deed restriction and that he would provide the VA six months to either vacate the tenants/agreements or initiate an appeal.

Several parties are affected by the ruling. In particular, UCLA spent $5 million to build a new UCLA baseball field replacing the former American League baseball field. The Otero ruling adversely affects its playoff games in the coming season. They have no alternative facility at this time.

“They are appealing the case,” said Rosebrock.