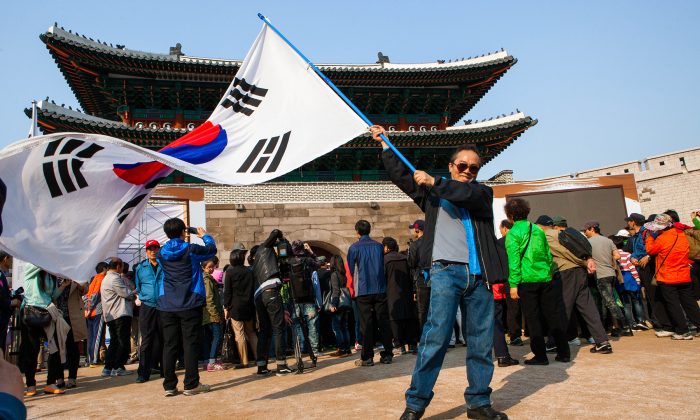 A man waves the South Korean flag in front of Namdaemun on the afternoon of its reopening on May 4, 2013. (Jarrod Hall/The Epoch Times)
Asia & Pacific

South Korea’s Ministry of Justice (MOJ) plans to simplify the process of naturalization for children of foreign permanent residents in order to solve a persistent decline in population growth.

A database from the MOJ suggests that 95 percent of the people that benefit from this revision are Chinese nationals. Many Koreans are concerned about the political motivations behind this revision as it seems to favor the Chinese Communist Party (CCP). Recently, more than 300,000 Korean citizens petitioned at The Blue House (Cheong Wa Dae), the president’s official residence, to oppose the measure.

Recent controversies between Korea and China include the origins of Korea’s kimchi, ancient clothing, and historical figures; the cancellation of Australian SBS television series “Joseon Exorcist,” which has been accused of twisting history; and projects including luxury hotels that only serve Chinese tourists and the construction of a Chinatown in Gangwon Province.

On April 28, the MOJ plans to introduce a “simple nationality acquisition policy” in the proposed revision. Children over the age of seven can apply for naturalization if they have resided in the country for five or more years, and children below the age of six can do the same but without any requirements.

It is also stressed that priority will be given to children of permanent residents, where more than two generations of their family were born in Korea, or foreigners that have intimate ties over bloodlines or history.

Holders of Chinese nationality benefit the most from this. According to the MOJ, 3,930 children will be immediately eligible to naturalize following this revision. Nearly 95 percent of them are Chinese, followed by Taiwanese (5.11 percent) and Russian (0.1 percent). In addition, it is expected that 700 more will also be granted citizenship.

Concerns about foreign infiltration and election fraud led 317,000 Koreans to sign a national petition in opposition to the measure.

One of the petitions states that “it is absurd to solve the issue of low birth rate and aging population through revising the Nationality Law,” adding that “foreigners can purchase real estate more easily than Koreans, and can run for elections and enjoy other benefits while the government ignores its citizens’ demands.”

“Koreans ought to protect and maintain our patriotism and national pride from the penetration of foreign propaganda.”

Many Koreans supported the statement and urged the Korean government to “stop selling our country to the CCP.”

On May 26, the MOJ held an online public hearing on the proposed revision.

In response, on May 28, Ahn Cheol-soo, representative of the People Party, remarked on Facebook that the biggest flaw with the revision was that the people that would benefit are mainly those of Chinese nationality.

“This [proposed measure] is providing Chinese nationals benefits through making amendments,” he wrote. “Is the government really thinking about the future of our Republic of Korea? I hope the government will listen to the voice of the people.”

At a press conference on May 28, the MOJ denied that the bill was amended for the benefit of Chinese nationals.

The MOJ maintains that while foreigners are granted citizenship, they will also bear corresponding responsibilities, such as taxation and military service. Additionally, these proposed measures will not change the “jus sanguinis”—the basis of the Nationality Law—referring to the idea that citizenship is determined or acquired by the nationality of one or both parents.