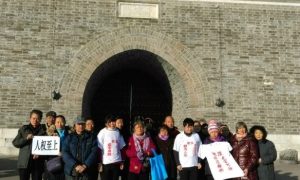 A worker adjusts security cameras on the edge of Tiananmen Square in Beijing on September 30, 2014. (GREG BAKER/AFP/Getty Images)
China

In China, Big Brother is watching you, and in Beijing he just got more eyes to improve his vision. According to a May 25 report by state-run Beijing News, the capital’s police forces installed 30,000 new security cameras, ostensibly to crack down on criminal activity.

The new system, building upon hundreds of thousands of cameras already in place, is intended to form a “solid prevention and control network,” according to the Beijing Public Security Bureau.

“The surveillance videos in the past were simply  tasked with recording evidence, but now we can actively identify and fight against illegal activities,” the city Public Security Bureau said in a statement.

The communist regime has long used public surveillance to monitor and crackdown on activists and civil groups seen by the Party as subversive. As the 26th anniversary of the June 4th Tiananmen Square protests and massacre approaches, the upgraded security network in Beijing seems to serve a pointedly authoritarian function.

Beijing authorities have also made use of the surveillance system to monitor and crackdown on practitioners of Falun Gong, a spiritual group persecuted by the Chinese Communist Party since July 1999, according to overseas Falun Gong information website Minghui.org.

Practitioners risk detention, torture, and death in custody at the hands of regime authorities for attempting to disseminate information about Falun Gong and the 16-year-old campaign aimed at crushing it. They have reported being stalked by police via the cameras, in addition to having their mobile phones tapped and homes put under direct surveillance.

According to Minghui reports, Beijing train stations are equipped with surveillance technologies that can recognize the faces of Falun Gong practitioners indexed by the Public Security Bureau.