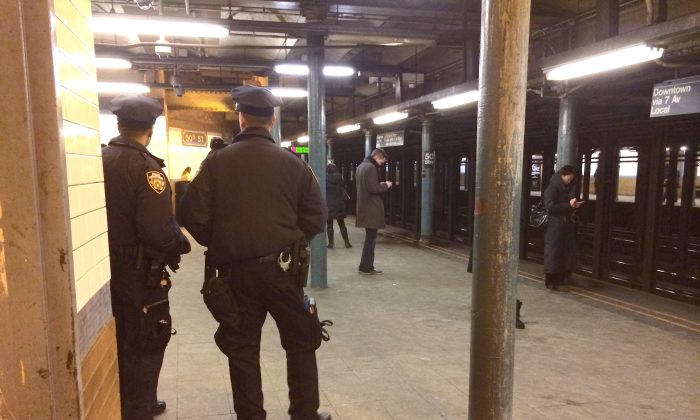 NEW YORK—Sunday’s Super Bowl at MetLife Stadium in New Jersey will be the most expensive game in its 48-year history. That is partly because of the massive security apparatus, both human and technological. Security officials gave details at a press briefing in Manhattan Wednesday.

Those agencies include the NYPD, the New York and New Jersey state police, the FBI, and the Department of Homeland Security, as well as agencies not commonly associated with security, such as the Federal Aviation Administration and the Environmental Protection Agency.

“We are doing all we can to ensure a safe and enjoyable event on Sunday,” said Jeh Johnson, Homeland Security secretary.

About 80,000 fans are expected to attend Sunday’s game. They will be accompanied by more than 3,000 security guards and 700 police at the stadium. There will be many more nearby on land, on the water, and in the air.

Even ahead of the game this week, you can see extra police monitoring subway and train stations. Security is tight for all Super Bowl-related events.

After the Boston Marathon bombing last April, security agencies are on high alert. They will be taking greater measures this year to keep people safe.

Game attendees are heavily restricted on what size and type of bags they can bring. Ticket holders will have their bags searched, walk through metal detectors, get patted down, and be asked to open their jackets.

But most of the security will be invisible, from video surveillance to radiation detectors.

NYPD Commissioner Bill Bratton said that at this time, police are not aware of any threats directed against this event.

But organizers are still being cautious.

“You don’t want to be overconfident,” said Jeff Miller, the NFL’s head of security. “You want to prepare and be ready, because you just don’t know what you might face on game day.”